In this piece the paper featured a few letters from campers and staff who were eagerly counting down to Opening Day and ready to get back to camp. 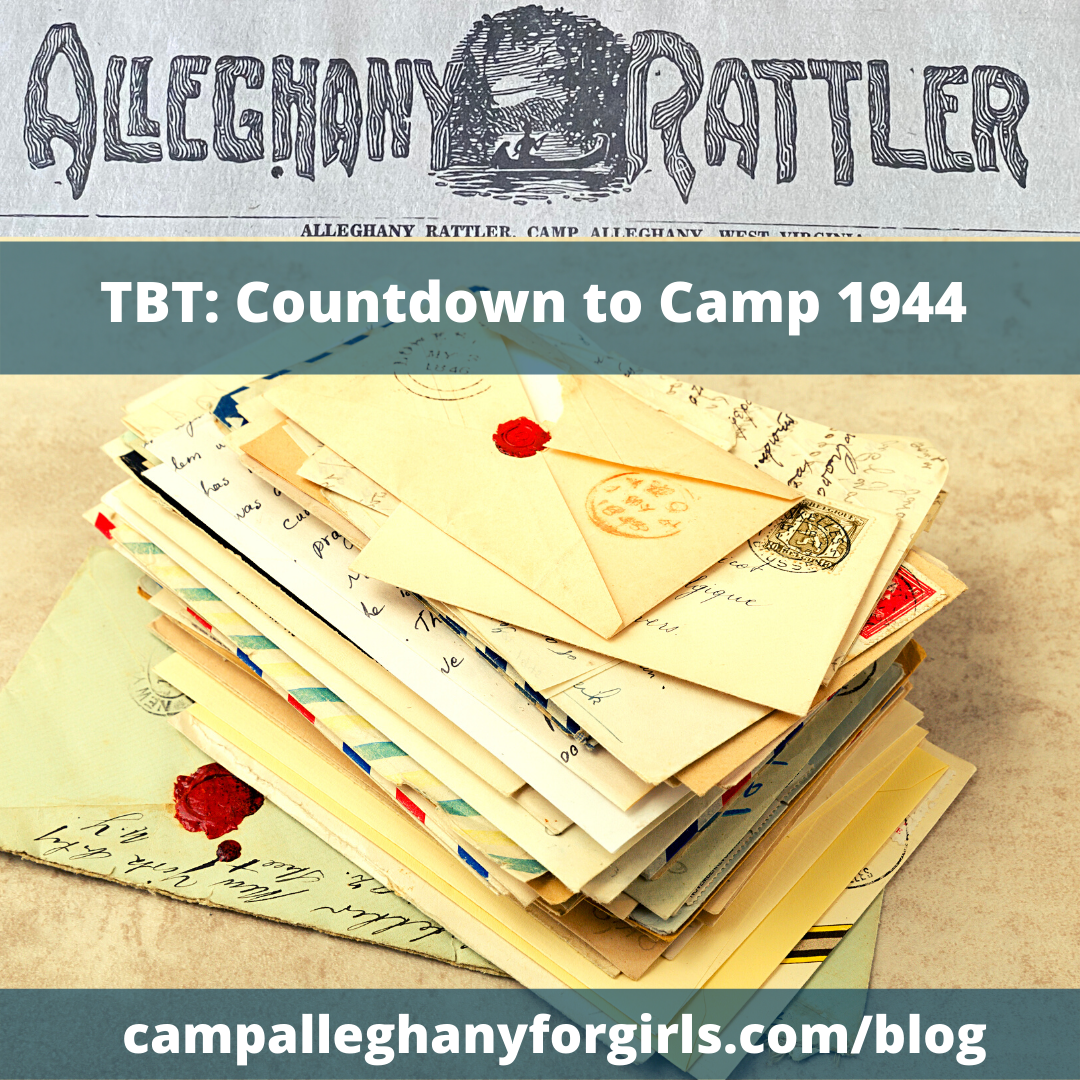 In this piece the paper featured a few letters from campers and staff who were eagerly counting down to Opening Day and were ready to get back to camp.

The moon is full and shining in our window. I can almost hear him whisper, ” I’ll soon be winking at you as I steal over the mountain and you lie in your cot.”

We were in Washington a couple of weeks ago and saw Punch! I saw very few of the girls in Norfolk for travel is so difficult there; however, I called as many as were at home! I saw Peg and she looks fine and is all set to give out at the store! Doc Kimbrough was in the hospital so I ran by to see her. She looks as if she were playing possum and she told me to be sure to tell you all to “put on your shoes!”

We have a crowd from this section of Pennsylvania this year, girls you’ll like, too!

Another treat in store for you is our new Waterfront Director and the sweetest girl — she’s really grown up — who will have fun with the tiniest Juniors. She is even bringing along the instruments for a rhythm band. Things to shake and bang. Sounds like a “bang up good time for all,” doesn’t it?

P.S. Thanks a million for all the Christmas cards. We were all laid up with the flu and never sent a card! I have meant to write to each one to say, “Thank you”  — especially Taffy for the picture in hers.

I thought I was “Camp Sick” in September but you ought to see me now! Washington gets more crowded every day and I get more anxious to be back at camp at the same rate of time.

Last month, I was really surprised when Elaine Lester called me. She, Mr. and Mrs. Lester, Suzie, and Lewis were all in town for the day so Elaine came over to Gunston about two-o’clock. Sightseeing, we took in the Lincoln and later completed Jefferson Memorial, Cherry Blossoms and all.

Driving (!) out to Arlington the other day, we passed Louise Leahy but she didn’t see us. (Did you Lou?)

I guess I’m the only recent Alleghanyite at Mount Vernon this year but Bebo Caldwell, Jane Gallagher, Betty Stoetzer, and Mary G. Sweante are all members of the M. S. U. student body as well as “alumnae” of Alleghany.

Bright Forecast! (For the Blues, I hope!) Met two awfully cute newcomers to Alleghany territory not long ago. Patsy (Texas) Murphy and Mary Loucheim, both of Cathedral School, are signed, sealed and to be delivered to C.A. on June 28th.

Speaking of that date, maybe I’d better cease this chatter and say “see ya’ll at the dock on June 29th!

These sunny days make us long for school to end quickly and for another glorious summer beside the Greenbrier to start again.

We see Ann Wills at dancing class every week. She has gained so much and looks grand. Some adorable girls from Knoxville will be with us this summer. Dorothy and Elizabeth are fine, and are just counting the days until school is over.

Hello to everyone from all the Allens.

I’d like to make a statement
But I don’t know why or whither
For school is nearly over
And I’m really in a dither
Greenbrier River is calling us
Alleghany is the berries
To get right up to camp once more
Will rid me of my “werries”
The news is scarce
But meanwhile goes
I think I’m coming to the end
Peggy, Frannie, (Martha too
Who’s writing this little verse to you)
Calls campers, counselors
“Don’t be zany”
“Come one, come all”
“To Alleghany.”
— Martha Winston

It won’t be long now until we gather around the camp fire together and sing our favorite songs. Won’t it be wonderful to get back on the Greenbrier under the stars again?

I’m really looking forward to a grand summer with all of you. I’ll see you on the dock, June 29th!

Editor’s Note: Peppered throughout this war-era edition of the Rattler was the phrase “Bring your ration book to camp.” We wonder why and how they were used?