You are here: Home / Traditions

This is the whole-camp meeting between breakfast and the first activity period Mondays through Saturdays. It begins with a short devotion led by Midways followed by announcements (including Blue/Gray scores — see Blue/Gray Competition below), singing of fun “Assembly songs,” and then Blue/Gray singing.

LUNCH UNDER THE APPLE TREE (aka LUTAT) 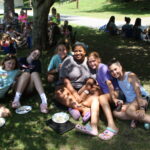 Picnic-style lunch on Thursdays served near the apple tree. Drinks are provided and campers may bring something to sit on and wear bathing suits/open toed shoes.

Each night except Thursdays and Sundays, Milk and Cookies are available for campers before Taps. Junior Camp Milk and Cookies attendance is required for all campers, and is held either in the Play Hall or on the Junior Tennis Courts.

In Senior Camp, Milk and Cookies is held on the Junior Tennis Courts and is optional for campers. This is a fun way to end the day as a community, sing songs and enjoy an optional evening treat! 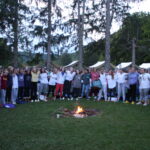 Traditional Thursday night Evening Activity held at the campfire sight near the apple tree. The evening begins with a presentation in front of the campfire, and follows with songs. Counselors are encouraged to sit with their tents during this time, and be respectful of the traditions and songs. A special evening activity that brings the camp community together around the fire. 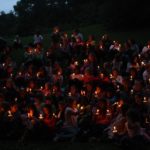 The last campfire of the summer, held on the second-to-last night of 2nd Term. A special campfire sight near Vesper Hill is reserved for this occasion. 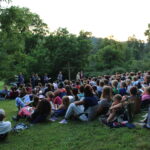 Traditional Sunday night Evening Activity held on Vesper Hill near the Rifle Range. The evening begins with a presentation, followed by singing and reflection looking out over Junior Camp and towards the river. Counselors are encouraged to sit with their tents during this time, and be respectful of the traditions and songs. 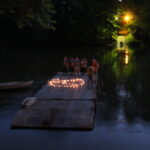 Campfire held on the last night of 1st Term. Silver bowl awards are given out, 1st term Blue/Gray scores are announced, and a special riverside ceremony ends the evening. 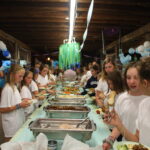 Overseen by two Heads of Banquet that’s held on the last night of 2nd Term in celebration of the whole summer’s memories, accomplishments, and traditions. A special banquet meal is prepared with a theme (that’s a surprise to all the campers), and an awards ceremony continues the festivities. Department awards, silver bowl awards, and camp spirit awards are given out. The JCs graduate in to full-fledged counselors, and the final Blue/Gray score is announced. 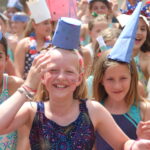 Held during First Term on the 4th of July in the afternoon in place of afternoon activities. Each counselor sponsors a booth and the campers enjoy the afternoon participating in various carnival events followed by all-camp Free Swim. At night we enjoy fireworks. 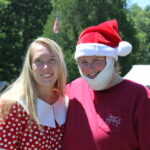 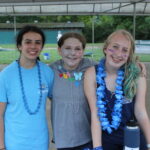 Blue/Gray is a long-standing Alleghany tradition that happens across the summer as well as across the years. Blue/Gray events promote friendly competition and sportsmanship, following the principles of the Honor Code.

All campers are assigned to the Blue or Gray team, a member of which they will remain for life. They participate in Blue/Gray events throughout the summer in activities such as the Swim and Canoe Meets, matches in Rifle, Archery and Tennis, and in games including relay races, Capture-the-Flag, trivia contests and more. The Blue/Gray tradition was begun in 1922 and a banner hanging in the Play Hall recognizes the winner of each summer. 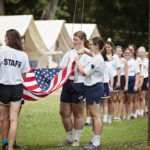 Every day during the morning and evening, we pause to honor the American flag being raised or lowered with bugle sounds in the background.

Girls who have been at camp for four years or more, and black is their color. This secret society adds a bit of mystery to camp since no one but the previous Four-Years knows what goes on the night of Four Year Initiation except that it’s a fun night of festive celebration of their four years at camp.

Inspection takes place every morning during Assembly. Each tent will be inspected and given a score on cleanliness and neatness in the tent.