You are here: Home / Our Directors

Camp Alleghany is a family-owned and operated business and has been for three generations. Currently, the directors include Elizabeth Shreckhise and her parents, Sam Dawson, Owner and President, and Bonnie Dawson, Head of Special Events, along with four phenomenal administrative team members. Together with their staff and counselors, these seven leaders effectively operate, maintain, and organize all of the functions of Camp Alleghany for Girls. 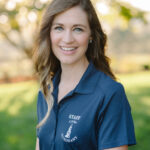 Elizabeth spent ten summers as a ‘Ghany camper beginning at age seven. She then became a Junior Counselor, full-fledged Counselor, and served in leadership roles such as Head of Dance, Unit Head, Head of Junior Camp and then Senior Camp. She was the Assistant Director from 2008-2017, and became the Director at the start of 2018. Elizabeth communicates with parents and oversees all camp activities, program planning, staffing, and professional development. During the off-season she oversees marketing, hiring, communications, program planning, strategy, and more. As a third-generation director, it’s her mission to bring ‘Ghany in to the 21st century while preserving its rich history and traditions. Elizabeth has an MA. in Education and Human Development from George Washington University and was formerly a school counselor. She lives in Staunton, Virginia with her husband Matt and three sons, Mason, Ellis, and Noah. Contact Elizabeth. 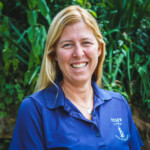 Stephanie started as a Jr Camper in 1987 and spent 7 summers as a camper at Alleghany before becoming a Junior Counselor in 1994.  Stephanie has been on and off staff ever since and has held “almost” every job in camp! She has been a Unit Head, Head of the Waterfront, Midway Mom, Upstart Mom, Head of Senior Camp, Head of the Store, Head Hopper, Mini Camp Counselor, and Assistant Head of Family Camp. She was Director of Family Camp from 2019-2022 where she really hit her stride.  Stephanie lives in Charlotte, NC with her two camper daughters, Sarah Helms and Betsy. Contact Stephanie.

Cami was a Camper at ‘Ghany for 8 years, a Mini Camper before that, and spent most of her childhood years attending Family Camp with her parents and sister. She is a Third Generation ‘Ghany Girl who has served as a Junior Counselor, Unit Head, StartUp Mom, and JC Mom throughout her many years along the Greenbrier. After graduating from the University of Miami with a degree in Creative Advertising and Graphic Design, she joined us on the Admin Team as the Leadership Program Coordinator. In 2022 she stepped into her new role as the Director of Marketing and Leadership which combines the planning of the Leadership Programs and direction of Alleghany’s Marketing and Social Media. Contact Cami. 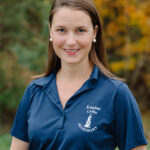 Louise spent 13 summers on the banks of the Greenbrier River. After eight years as a camper, she worked as a Junior Counselor, Counselor, Unit Head, Upstart Mom, and taught canoeing. Louise met her husband, Cooper Dawson, at camp when he worked on the Green Team. After ten summers spent at Tent Raisings and Family Camp, Louise joined the family business as our Office Manager. Cooper and Louise live in Lynchburg, Virginia with their daughter, Sally and son Henry, who she loves bringing to Camp Alleghany during the summers! Contact Louise. 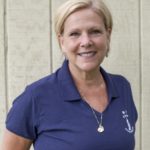 Beth Anne (BA) has spent over 50 years as a camper, counselor, Unit Head, Department Head, Upstart Mom, Director of Mini Camp and now as Outreach Director at Camp Alleghany. She is also very active with Camp Alleghany Alumni, remaining joyfully engaged year-round, bringing loyal, veteran alumnae back to work alongside her in varied roles at Camp, including connecting and serving at the L.O.L. Alumni Weekend, enjoying Family Camp together, and more!  BA has a Masters and Ph.D. in Education, and  recently retired as Dean/University Professor at a NE Ohio university. She gratefully resides just a few miles downriver from camp in Greenbrier County, WV.  Contact BA. 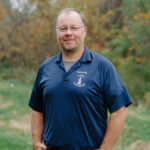 Garrett began working for Alleghany in May of 2010 as Facilities Director, visioning and building much of Camp’s newer infrastructure — such as the new Bathhouse, Office, and Camp Store. In 2020, Garrett took a brief hiatus from camp and then returned in 2022 in the new role as Site Manager. He’s eager to keep camp up and running and introduce more ideas for camp’s outdoor education setting. 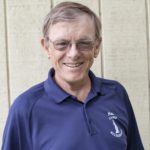 Sam spent eight summers as a camper at our brother camp, Camp Greenbrier Boys Camp, and then worked at Alleghany on our  Green Team in the 1960s. In 1984 he became the Associate Director, working under his father S. Cooper Dawson, Jr. During the 80s and 90s Sam managed almost all aspects of camp. From 2000-2017 he was the Director, and he works year-round for Camp Alleghany. A Certified Camp Director, Sam loves camp and holds Alleghany to the highest standards, continuing to earn the American Camp Association’s accreditation status each year. He looks forward to each summer with excitement and anticipation and hopes to see all of you at Alleghany this year! Sam lives with Bonnie in Staunton, Virginia.  Contact Sam. 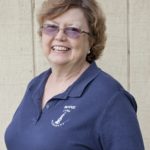 Bonnie was introduced to Alleghany when she married Sam in 1970. Over the years she’s been Head of Drama and Wild World, Head Hopper, Store manager, and a Senior Camp tent Counselor. She’s currently the Head of Special Events, managing Alleghany’s special ceremonies such as Babies’ Boats, Candlelight Campfire, and the Mini Camp Banquet and Show of Shows. Bonnie also handles risk management and emergency procedures and leads a non-denominational service on Sundays. Bonnie is a retired science teacher. She always looks forward to the serene, peaceful setting of the West Virginia Mountains, and seeing the happy, smiling campers every day. Contact Bonnie

Mary-Curtis Powell is one of four “Smart” family girls who attended Camp Alleghany over various years, beginning with Family Camp as a toddler.  After attending as a Junior Camper in the late 80’s/early 90’s, and then working as a counselor in ’98 and ’99, Mary-Curtis returned to camp in 2015 to work as the 2nd Term Office Assistant.  Prior to working for Camp, Mary-Curtis had a career in Education.  Mary-Curtis lives in Richmond, Virginia with her husband, and her three children: a former camper, a future camper, and a future Green Team member. 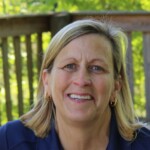 Ann Claiborne “Ace” Dandridge is a lifetime ‘Ghany girl. She is married, lives in Charlottesville, Virginia and has three daughters, each of whom started camp as a Mini Camper and continued on to be counselors. Between the four of them, they have 40 years of ‘Ghany experience and a lifetime of memories and friends. Ace is thrilled to introduce the camp experience to the young girls and their moms or special friends during Mother-Daughter Weekend!