In this piece we see the love of nature that has always been a part of camp life. Its admiration for spiders came out just a few years after the release of E. B. White's famous Charlotte's Web. 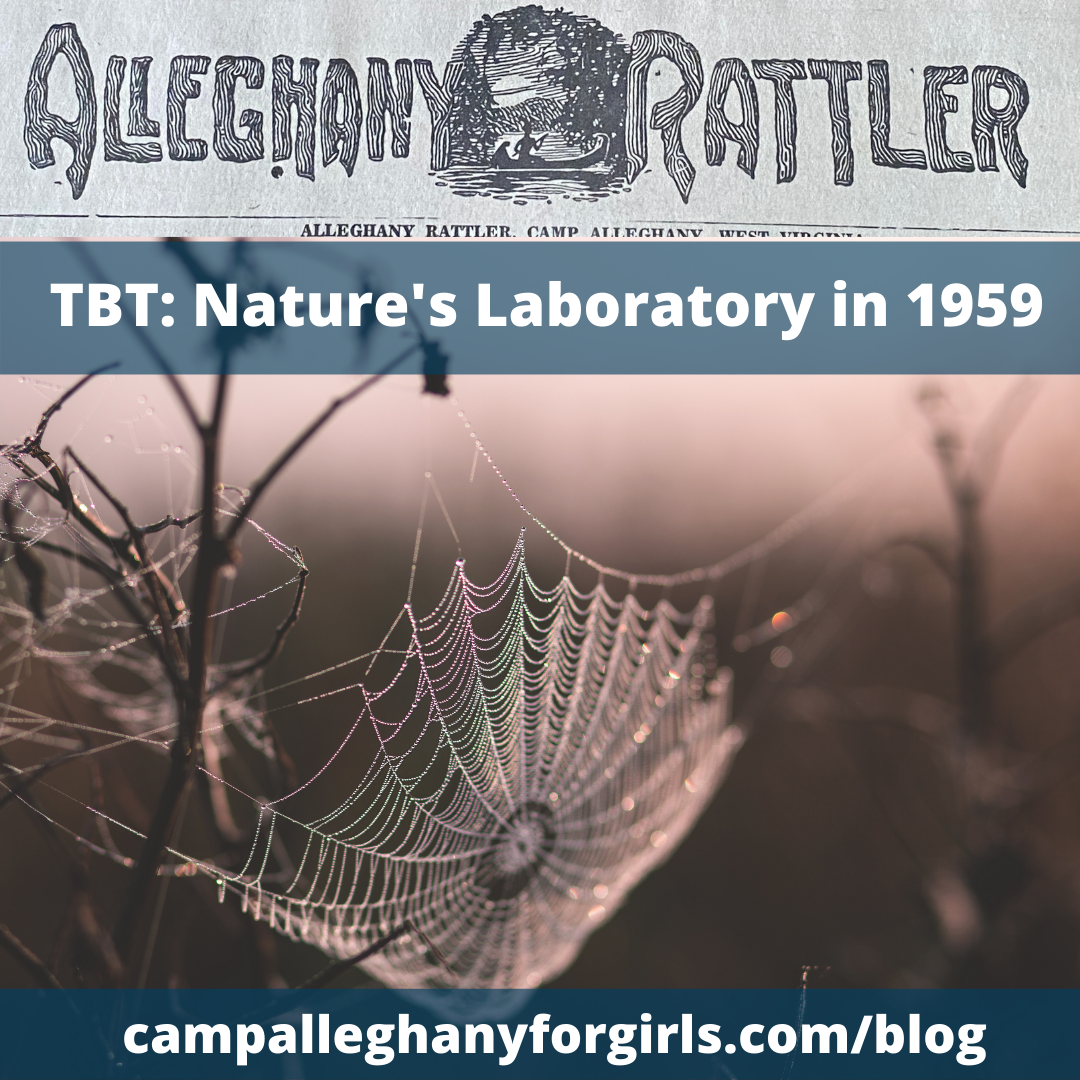 In this piece we see the love of nature that has always been a part of camp life. Its admiration for spiders came out just a few years after the release of E. B. White’s famous Charlotte’s Web.

In the dark of night two campers started down the well-beaten trail to Pancake’s John. Suddenly they turned and headed back in a run. What could be in their path? I, the sentinel, hurried to met them. In excited, but low tones, lest they awaken the sleeping campers, they said, “Come, Emma Sue, and see what is in our path. It is beautiful.” There we turned our lights on the largest and most beautiful spider web ever to be seen in Alleghany’s Nature Laboratory. Rainbow colors shone from every angle of the expertly woven web, which was nearly a yard in diameter. It has been said that the web of an orb weaver ranks high among the wonders of nature. We were surprised to find the large web there; for less than an hour ago the path had been filled with campers. The weaver stopped only long enough to survey the situation because she had work to do and a limited time in which to do it.

Nature had spoken and well she knew that an attractive, but tricky place of abode must be woven that night because a male spider was heading her way a-courting she hoped. Now, the male spider is small, drab in color and the weaker sex, but be that as it may, the female preens herself for his coming; and she simply cannot resist his mating dance — wiggling his palps — a sort of Elvis wiggling orgy. Because of the female’s beauty, the male gladly walks into her parlor. She knows it will do him no good to have a change of heart and spurn her love because it will be impossible for him to escape! She had stretched upon the framework of the web a sticky and elastic line which would not only prevent his escape, but the escape of other insects once they enter the web.

Following the mating the female eats her husband. She now faces the tasks of weaving an egg sac which she places in a burrow for protection. She must also catch many insects, not only for her food, but for the young soon to hatch.

At this point we learn why these eight-legged little animals deserve to be considered friends. The reason lies in the tremendous service they perform in keeping in check insects such as grasshoppers and locusts which, if not kept under control can destroy entire grain crops. They also cut down on the number of beetles and caterpillars which feast on trees, and they eat flies and mosquitos which are a constant source of trouble. Mosquitos and flies would make life unpleasant at Alleghany if it were not for the many spiders. If you were a keen observer you saw hundreds of spiders and other insects in the tall grass on Vesper Hill that first night. A count was made by naturalists which showed that there were two million spiders to one grassy acre. This may not be the average, but an acre of any grassy land is likely to shelter many thousands.

While few of us are convinced that spiders are an aid to mankind, the majority of people take all spiders to be deadly poisonous. In this belief is reflected the sad misunderstandings that have plagued spiders for countless years. True, they are equipped with a poison to use for securing their prey, but by nature they are timid with humans; and far from seeking out humans to bite, they do their best to avoid coming in contact with them. They will walk over a person’s skin without making an effort to bite. In fact, most of the spiders we come across are so small their biting apparatus is not strong enough to break through the skin of a human.

The only spider native to the United States which can inflict poisoning of a truly serious nature is the Black Widow. Since none have been found in Alleghany’s Acres, there is no excuse for killing our valuable friends, nor for destroying their beautiful webs, which not only glisten in the early morning dew, but serve as traps for our enemies, the harmful insects.