This 1943 piece has Alleghany Girls stepping up to mass communications with a radio game show, something that would have been all the rage at the time.

This 1943 piece has Alleghany Girls stepping up to mass communications with a radio game show, something that would have been all the rage at the time. To top it off, it was a Blue-Gray competition organized by the Junior Counselors!

Grays “Take It” and “Leave” the Blues 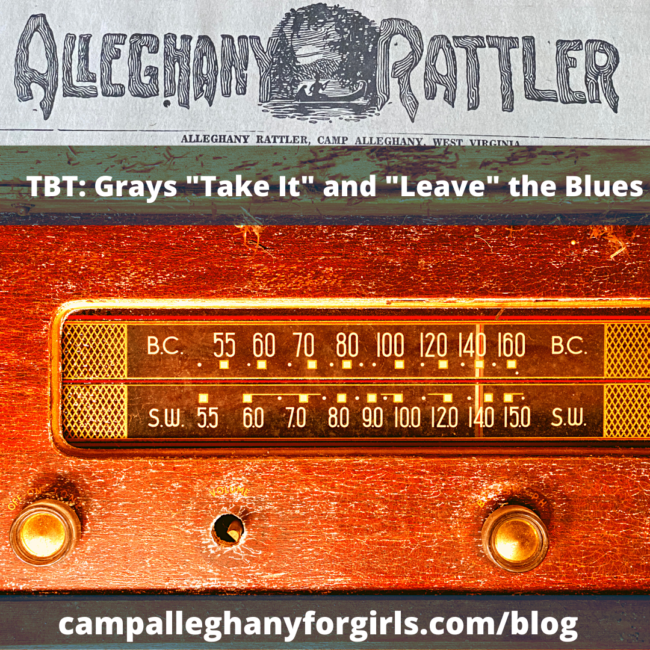 Great excitement filled the Play Hall Monday night as the “Camp Alleghany Broadcasting Company coming to you over the Blue and Gray Network” presented its original version of the “Take It or Leave It” program sponsored by the Peg Wilson Eversharp Fountain Pen Company.

Contestants were picked at random from the Blue and Gray teams by a blindfolded member of the broadcasting company.

Camp Alleghany went on the air at exactly eight o’clock by the sound of the gong and the contestants came forward one by one, first from one team and then the other and chose the set of questions they wished to answer. Alleghany was privileged to have the original Bill Faker himself who directed the radio show in his usual grand fashion.

The program was interrupted in the middle by an important news flash from our nation’s capital. Secretary of Navy Knox had just announced a new addition to the navy personnel and also that there was no longer a “Pop” Worthington, but from henceforth — a “Grandpop” Worthington!

Several contestants from both teams were so successful in their answers to the questions that they went straight on to the 64-point question and won the cherished 64 points for their team. Great was the enthusiasm of the audience as the contest grew to a close with the Blue and Gray teams almost even in the number of points.

But the jackpot question decided the contest, for three grays and two blues got the right answers to the question as to why Alleghany and Greenbrier are brother and sister camps. And so the victory went to the Grays for the greatest number of points.

Thanks again go to those Junior Counselors who were responsible for bringing “Take It or Leave It” broadcast to Camp Alleghany, and to the Peg Wilson Eversharp Fountain Pen Company as its sponsors.