During its 50th season, the Alleghany Rattler was chock full of 50th anniversary celebrations and reflections, including this "history of camp." 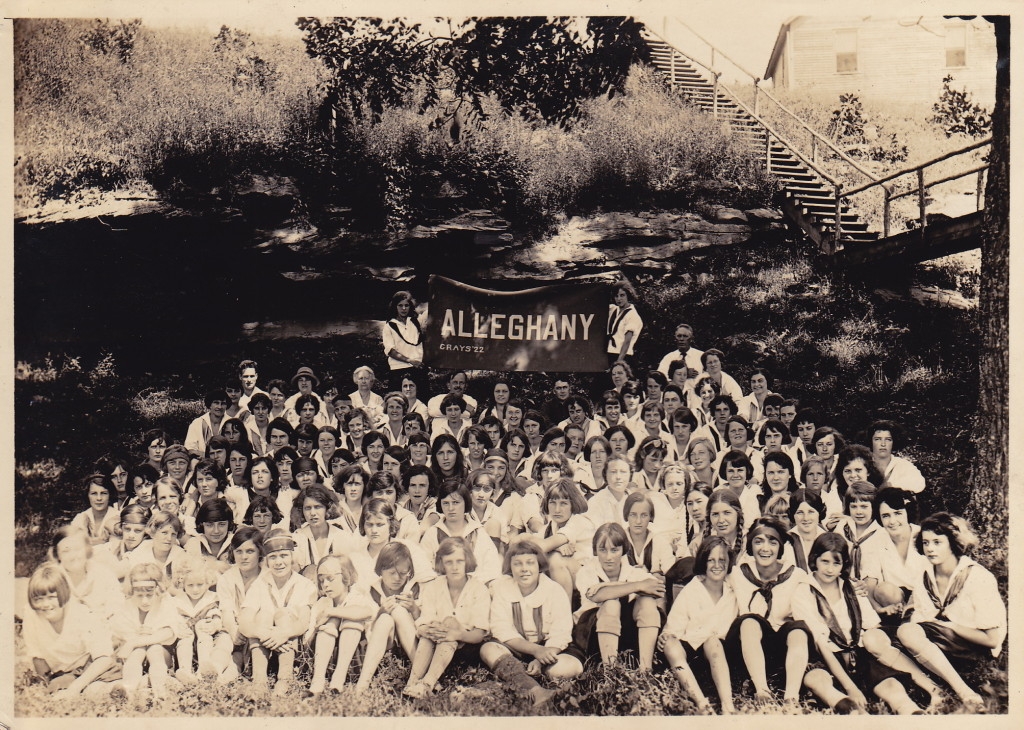 In this piece camp is in the heart of its 50th anniversary celebrations and wrote a big history of the first 50 years. The next few Rattler throwbacks will continue to focus on that summer’s events and reflections.

This year we are celebrating the end of the fiftieth season of Camp Alleghany. So it seems fitting to pause on this anniversary and look back over the foundation and development of our camp.

Camp Alleghany was founded in 1922 by President Walter Hullihen, of the University of Delaware, and by Mr. and Mrs. Hugh S. Worthington, of Sweet Briar College, Virginia. Dr. Hullihen had established Camp Greenbrier in Alderson in 1898, and had personally directed it from that time until he left Sewanee and went to Delaware in 1921. Mrs. Worthington had been associated with Camp Aloha, Fairlee, Vermont, in its earliest days, and had been director of Camp Marbury, Vergennes, Vermont. Mr. Worthington at that time had been Professor of Romance Languages at Richmond, V.P.I., Virginia, Johns Hopkins, Ohio State, Chicago, and Sweet Briar. At its foundation, therefore, Camp Alleghany was a combination of twenty-five years of West Virginia camping experience on the part of Dr. Hullihen, twenty-five years of knowledge of New England camps on the part of Mrs. Worthington, and twenty-five years years of “total inexperience with camping” on the part of Mr. Worthington.

The present camp site at first consisted of sixteen acres and two buildings — what is now the Cottage and an old barn located down by the south gate. In 1922 the Dining Hall, KItchen, and Store Room were built. The lower floor was used as a Dining Hall and the upper floor as a Crafts Lodge and Assembly Hall. The Camp Store was located in the room that is now used as the Camp Office.

In 1924 the old barn was torn down and the Senior Crafts Lodge was built out of the lumber in the barn. In 1925 the rustic porches, designed by the late Mrs. Paulette Clark of Lynchburg, were built around the Cottage and the Cottage was repainted inside and out.

Junior Camp was at first a separate Unit on the Senior Tent Row, established by Miss Shirley Patton of Kentucky, Director of Nurses at the Garfield Hospital, Washington, D.C.. In 1928 Junior Camp was established as a separate Unit, and the Junior Crafts Lodge was built. In 1930 the Playhall was built halfway between Junior and Senior Camps. During all of these first ten years of camp small buildings, such as showers, latrines, dry room, Store and Post Office and the servants’ house were being built one by one and enlarged and improved as conditions demanded.

Since 1930 the camp has purchased an additional 175 acres of land. This tract embraces the two mountains back of us and about a mile of bottom land on our side of the river.

In 1938 the camp chimes were presented by former campers and counselors in memory of Mrs. Worthington.

Electricity was installed in 1941. Happy Day!

In addition to Dr. Hullihen and Mr. and Mrs. Worthington, Mrs. C. M. Alderson of Charleston joined the camp staff in 1922 and was a fixture at Alleghany for more than 25 years. Her deep and abiding interest in Camp Alleghany and her belief in the opportunities provided at Alleghany for the development of young Americans made her contributions to the camp invaluable. Furthermore, the girls she brought each year through the deep depression years helped materially to keep camp solvent.

In 1928 Bucket Mann also gave the first operetta, and this annual highlight of our calendar was continued many years.

The original camp colors were blue and gray, and in 1922 the campers were divided into the Blues and Grays. The teams began that year the spirited and friendly rivalry which has enlivened every camp season since. Up to this year, 1972, the Grays have won 21 years and the Blues 29 years. The rivalry is still happy and joyous and intense!

Other outstanding counselors at camp in the past have been Mrs. Alvert S. Peet of Knoxville, who was director of Junior Camp, Miss Martha G. Gordon, St. Christopher’s School, Richmond, who was dietician for more than ten years, Helen MacMahon, who was successively in charge of crafts in Junior Camp and Senior Camp and then Head Counselor spending nearly 25 years at Camp Alleghany, and Mrs. Alfred Chanutin, director of Junior Camp during the 1940s. Last but not least comes Wheeler, who worked at Alleghany from 1922-1965 inclusively, and only left due to poor health, after he set the record — 44 years of service. Wheeler died in 1969 but his family still remember Alleghany and his relatives, Mr. and Mrs. Epoch Higginbotham, came to our 50th anniversary celebration.

As the charts on the walls of the Playhall show, from the very foundation of camp in 1922, we have had both Camp Spirit and Honor Girl.

To a Greenbrier boy from the other side of the water, many other counselors stand out in the years 1930-1960. THere was Kay Stokes on the Rifle Range with Phyllis Shelton Downing, Margaret Martin, Margaret Worthington, Bessie Minor Davis of Lynchburg, Alleghany Storekeeper, Peg Wilson and Kitty Garnett from Norfolk, Mary Lib Alderson of Charleston, Nick and Cary Carter who taught swimming and later helped Nacy direct the camp; Libby Williams Miller, Don Bartlett, Kattie MacMahon of Huntington, sister of Helen and a strong counselor, Mrs. Whelchel, Mrs. Lester who went on to own and operate our great rival Appalachia, the Vandells, the Spears, Marty Bieler Wysor who spent 18 years at ‘Ghany starting as Junior Camper and ending as Head Counselor, Kay Sprunt who also spent many years as camper and counselor and many others too numerous to name in this short article. Actually it is very difficult for this writer to name many outstanding counselors due to a real lack of knowledge. So, please excuse any omissions, as the failure to list counselors is strictly unintentional.

…years after the death of Pop, but in the fifties, Nancy Worthington brought out her brother, Bill, and operated the camp most successfully through 1963. Mottie Haverstick became Head Counselor in the mid-fifties and reorganized the two camps into the four divisions or Units still used so successfully today.

Our famous Baby Boats program was established by Millie Barrett West and our Director of Activities, Dave Henneberg, came to camp in the late 1950s as Head of Crafts. Bill Keister, affectionately known as Uncle Bill, joined the staff in 1950, where he continued as Head of Rifle and Dean Emeritus of the entire staff for 20 years. Bernice Sullivan came from Huntington to head the Junior Camp and her granddaughter is now a camper at Alleghany.

Katherine Fontaine Syer, Camp Alleghany 1935, served as Head of Junior Camp 1964-1970 where she performed an outstanding job in building Junior Camp into a strong, happy organization.

Sally Bell Aydlett, Camp Alleghany 1956-57, succeeded as Head of Junior Camp in 1971 where she continues a strong administration.

During the past ten years, the staff has been greatly strengthened and stabilized and the entire program runs very smoothly under the very able direction of Dave Henneberg, Director of Activities.

At Alleghany, we still follow the principles of honesty and faith in God and love of your fellow man laid down so long ago by the Founders. We still have discipline and regulations and our girls learn to live together with love and respect for all around them including their environment in the beautiful Greenbrier County, West Virginia.