This 1964  piece shows that many things about being a Junior Counselor are rooted in 'Ghany tradition. And some things have changed in nearly 60 years, too!

This 1964  piece shows that many things about being a Junior Counselor are rooted in ‘Ghany tradition. And some things have changed in nearly 60 years, too! 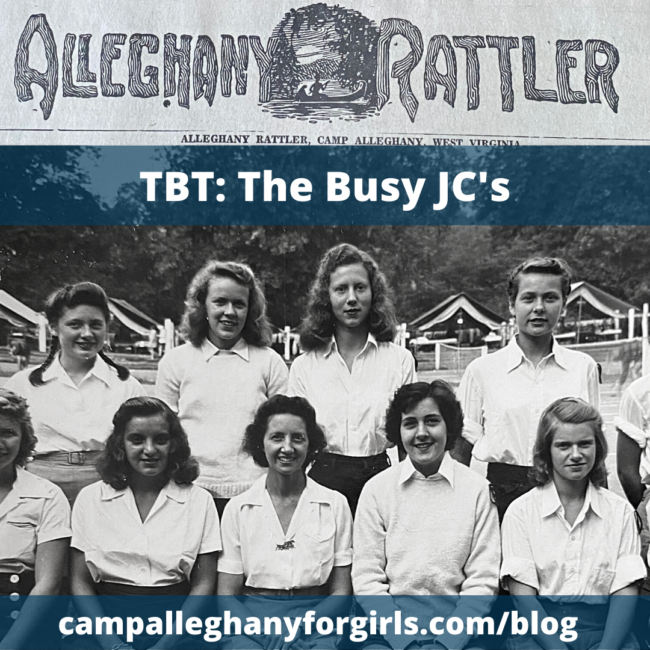 J.C’s together in every good deed…

Allowing for a little plagiarism, these words effectively express the spirit of the J.C.’s.

During the last six weeks, the J.C.’s have worked as a team planning and participating in many activities. When the 2nd year J.C.’s weren’t talking or teaching a class, they were planning a surprise for their little sisters and their mother purple cloud (alias Annette Dapp).

While this surprise was being planned, the new J.C.’s were spending their time studying campcraft. For two hours a day, three days a week, Blanche would attempt to teach her J.C. tenderfoots the basics of campcraft.

Upon completing most of the course, Blanche and the 1st year J.C.’s took off on a three-day overnight at “Shad’s Paradise.” The J.C.’s learned many things on this excursion, especially not to stay in the pines when it rains.

After many visitors and adventures, the now skilled campcrafters returned to the luxurious camp slightly exhausted.

The Purple Party (presented before the three-day overnight) was a gala affair held in honor of Mother Goose. The Purples converted the Play Hall to a “Goose Roost,” complete with hay, a picket fence, and even a live duck (for lack of a goose). The program was filled with skits, dances, and songs — all takeoffs on Mother Goose rhymes. After a lively “Sing a Song of Sixpence” the refreshments were served: purple punch and devil’s food cake.

Now minus one J.C. and one purple mother, the J.C.’s and their “gramother” Shad continued to be very busy. The first activity of second month planned by the J.C.’s was the trial of Horace Garfunkel. Horace Garfunkel was brought before the entire camp and tried for self-centeredness and selfishness.

It was found that Garfunkel was guilty, not only of selfishness in the tents, but also in general camp life and various groups. He was convicted of this heinous crime and burned to death along with all the selfishness that might have existed elsewhere in camp.

Always on the go, the J.C.’s also planned an all-day activity and will soon be presenting a Vesper Service.