Lessons Learned in Going From Camp Director to Camp Mom

My final blog in a series devoted to what it was like to send my son to camp for the first time even though I am already a camp director. I learned that it isn't easy, but it is good! 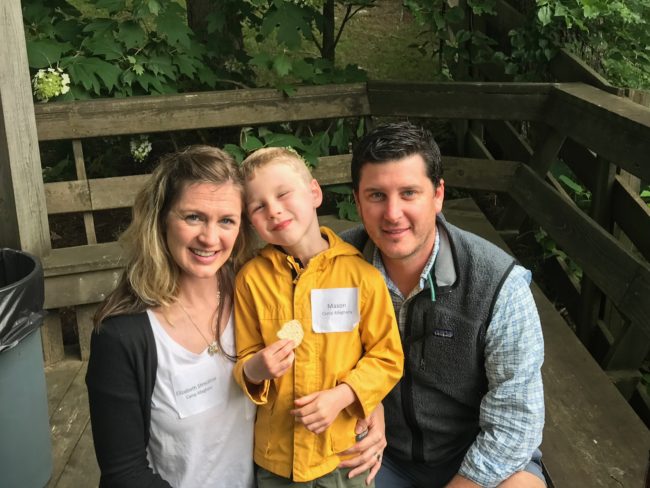 Editor’s Note: What is it like to be a camp director and then suddenly find yourself on the opposite side, as a parent sending your child off to sleepaway camp for the first time? In this blog series I write about the adventure of sending my eldest child, six-year-old Mason, to his first camp experience. Previous posts include:

Now that I’ve traveled the whole arc of my son’s first time at sleepaway camp during this past year, I’m now looking back on the lessons I’ve learned as a parent and as a camp director about that first time experience. I hope this final blog entry in this series — From Camp Director to Camp Parent — will be helpful to other parents sending your child(ren) away to sleepaway camp for that all-important first time.

I’ve been in the camp industry in some ways for my whole life, having essentially grown up at camp. And I’ve spent about a decade as a camp professional in my role as Assistant Director at Camp Alleghany for Girls. Refreshingly, I find that running a camp is a job where I’m always learning. As parents we’re always learning, too.

And that’s great because who wants the same old same old year after year?

Times change, parents change, kids change, ideas change, pedagogy changes, and priorities change, all of which we try to flow with at camp while balancing the traditional with the innovative, the reliable with new approaches.

I came in to this role from a lifetime at camp as a child and teen, camp counseling jobs, a Masters in Counseling, and time working as a school counselor, but not as a parent. Halfway through my current role I became a mom and now, seven years later…I’m a camp parent, too! That has changed me — and it has changed my approach to and understanding of the job. I’m so happy for that growth.

I’m deeply touched that I now share in common with other parents that it is our babies — whether 6 or 16 — that we are sending off to be stewarded and cared for by others at sleepaway camps. As a camp director I take that responsibility very seriously.

And so I’m both awed by and delighting in what being a camp parent has added to my perspective. It’s an insight that I can expect to continue growing across my future as both a camp director and a camp parent, particularly given that my (ironically) three boys will never officially attend Camp Alleghany for GIRLS other than as family members to the directors, and will likely be off on their own camp adventures for many years to come. 🙂

So what are those lessons I learned? Let’s start with camp photos.

I now understand that the pictures shared via the Internet (camp parent portals) are important to today’s e-connected parent, myself included! But at the same time, I see that they’re not everything!

Since I’ve argued against sharing camp photos during camp (though we DO share them), oddly, I found that I, too, wanted to see my son Mason in his camp’s e-pictures. I came to see that access to photos in semi-real time is certainly a nice feature. I saw this from the parents’ eyes for the first time.

However, since in most of the pictures with Mason he wasn’t smiling, I almost feel like if the pictures weren’t there at all, I wouldn’t have worried in the least.

Every parent is different on this, so I guess I’ll just offer my perspective —  if we’re going to continue offering pictures at ‘Ghany while camp is ongoing, then I understand more fully the importance of capturing every child and making sure they look happy.

As a camp director I still feel like less is more. To me it would be awesome if we just didn’t even offer a parent portal for pictures (don’t worry —  we’re not getting rid of it!), because historically that is NEVER what camp has been about (camp yearbooks have historically come out after camp is over).

BUT, given the Internet-ready times, I’ve learned that, “If you’re going to post pictures, which I’m personally not a huge fan of, the pictures are important to parents and camps need to make sure every kid is featured and has a smile.”

I’ve learned that early communication is a reassuring thing for first-time camp parents.

I know that in the last decade or so, many other camps have begun to do early outreach to parents after new campers have arrived. It’s something I’ve thought about doing at ‘Ghany, too. After sending Mason off to camp for the first time, my urgency to implement this has grown.

A quick phone call or email to all new camp parents within the first 48 hours is huge!

In Mason’s case, as I wrote earlier in this series, we received a phone call and an email within the first 24 hours from a Head Counselor/Director figure who wanted to connect with me, share a few words about Mason, and simply make that personalized gesture that says, “Your child is our priority.” As a parent, I really liked that.

As a director, going forward I intend to implement something similar for new camper families. In many ways it’s a very small but very meaningful way to offer reassurance to parents who are doing something that they rightfully feel is HUGE — sending their child away to non-family members for the first time for an extended period of time. In today’s age, parents need that and I can understand why!

I absolutely LOVED it that Mason’s camp offered a parent night in the months leading up to camp. In this blog series, I posted about attending his and now I’m hoping to plan a few of these around the area for the spring!

I can see that this is a valuable resource for first-time camp parents in providing both a reminder about particular information, due dates, forms, packing, and orientation as well as a chance to get to know camp directors in a more informal setting prior to that first drop off date at camp! It’s a very good thing.

The whole experience has affirmed more than ever for me that camp is good for kids!

I’ve been doing this job for a while now and always talk about the benefits of camp for kids, but hadn’t experienced it for my own kid.

There are too many examples to give on why the benefits of camp are real, but the most significant one — the one I talk about ad nauseum to friends/parents/etc. who ask about Mason’s experience — is pretty humble: How he didn’t pass the swim test at camp and how that was a routine life lesson in a life that will be…full of lessons!

On his own at camp there was no parent to rush in and scoop Mason up and tell him it will be ok (though he was counseled in a supportive way by his camp staff). Though we knew about it, we didn’t call his camp directors to demand a retake. There was no pretending it didn’t happen, or worse —  pretending he actually did pass just to make him feel better.

In essence, there was just good old fashioned disappointment, without mom or dad to rescue him.

And you know what? He survived.

I’m told he was devastated in the moment —  really crushed by this. But this small and rather common failure among the youngest at a camp took place in a safe, loving, encouraging environment (go camp!), and he picked himself up, learned how to deal with disappointment without one of us there, and got on with the rest of his experience.

Since then, such a failure has proved motivating for Mason in a positive way. He has asked me several times this fall when he’s going to take swimming lessons again. He’s focused and determined to pass that darn swim test this coming summer! What’s next, swim team?! 🙂

Matt and I are going to work with him over the winter on this, and will be full of encouragement, advice, and practice sessions. But we’ve also been pretty honest with Mason about the fact that the camp swim test is rigorous, and that it has to be because lives are at stake. Swimming and all water safety — canoeing, rafting, free swim — are critical issues at camp that we take very seriously. The test is hard for a reason. So we remind him that in spite of his hard work there’s a chance he still may not pass it, and if that happens, that he doesn’t give up, he keeps trying.

Luckily, that’s making him even more determined to try to succeed, which is a positive end in itself. He is growing because of learning about the world in a way that we couldn’t teach him on our own. It was his discovery in his place on his terms — and now it’s his self-determined goal. I love that.

As you can imagine, camp is back on the docket for Mason next summer and like other returning campers, camp can’t come soon enough for him!

But for me as a camp director, and as a camp mom, I’d like to slow down the season. I’ve got registrations to process, parents to counsel, teams to meet with, programs to revisit, emerging programs to develop, staff to consult with, conferences to attend, and life with my husband and sons to enjoy in the slightly less busy off season of the camp world.

So let’s not rush the season. But let’s still celebrate camp. It’s such a wonderful part — and crucial part — of every child’s life and education! I’m doubly sure that it is the right thing for kids after seeing camp through my young son’s eyes.

This being a parent thing doesn’t come with an instruction manual, even when there’s some good advice out there. We learn as we do.
One final thing I learned is continue to trust in myself as a parent. I know we’ve given Mason good principles, encouragement, understanding, communication skills, and support and when I sent him off to camp for the first time I trusted that even at his young age he would hold on to the inner rock of who he has become even while on this short jaunt away from home.
When he got back, his experience reaffirmed for me that we are doing a good job with him — that we’ve nurtured his capabilities and his budding confidence well and that it’s working! Letting him try his wings in a safe place — camp —  out only made him, and all of us, stronger as a family.