My son went off to his first sleepaway camp this summer. As a camp director, I knew the drill. But as a child, it was all new to him. What happened? Read on... 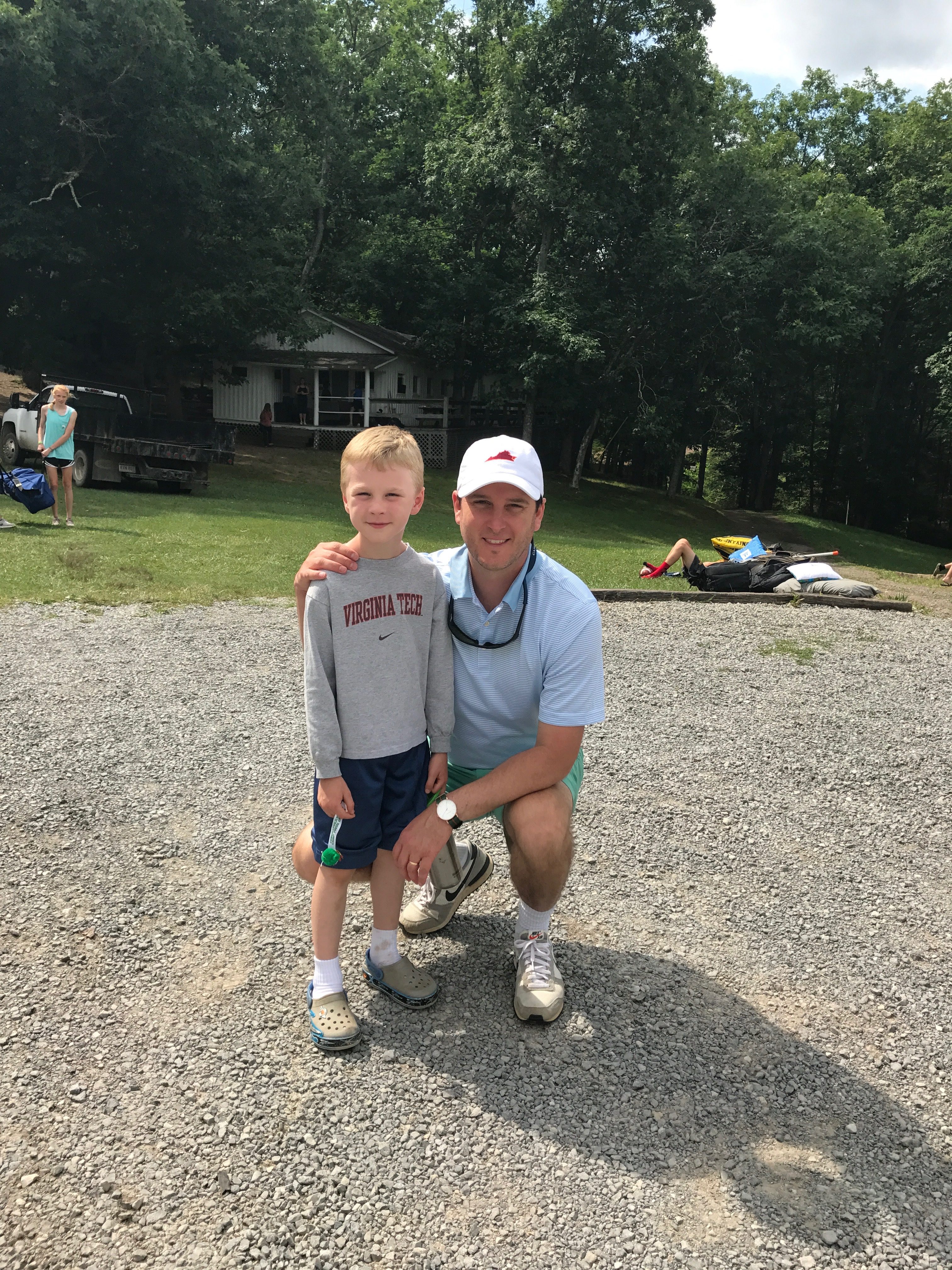 Editor’s Note: What is it like to be a camp director and then suddenly find yourself on the opposite side, as a parent sending your child off to sleepaway camp? In this blog series I write about the adventure of sending my eldest child, six-year-old Mason, to his first camp experience. Previous posts include:

I last left off in this blog series by talking about my experience while Mason was away at sleepaway camp for a week. But now it’s time to tell about his experience.

With Mason away from home for the first extended time (and not at a family member’s place) his first sleepaway camp experience felt a little like an eternity to me. I was busy, so I tried not to think about him every second…but I did think about him!

The day finally came to pick him up from camp, and this time instead of bringing the whole family, my husband Matt and I decided to leave our two younger boys back at Alleghany and pick up Mason ourselves. This way he could have our undivided attention (and we his) while he told us all about the experience.

Of course, just like any other parent picking their child up after being away for a week, we couldn’t wait to see him and hear his voice and listen to all his stories! 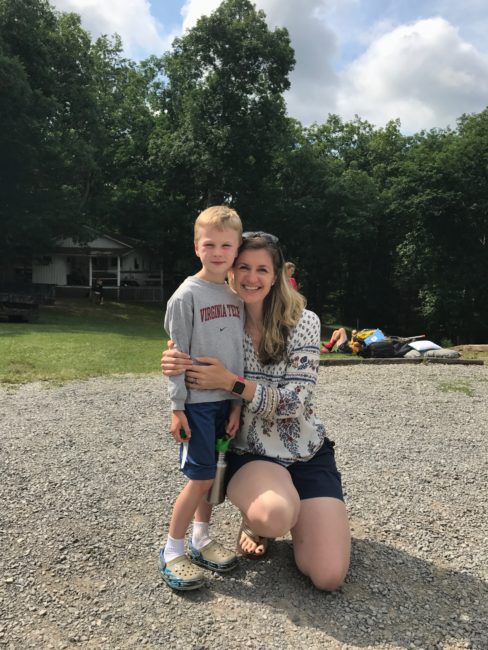 When we arrived, we told a counselor who we were there to retrieve, and we were told where to park and wait. When we got out of the car, we saw him walking toward us from afar with a counselor. When he saw us, he took off running toward us, which was such a joy to see! It was a great reunion. I pulled out my phone to capture the moment, and he ran right into his dad’s arms.

Mason was ALL smiles, very happy — excited to see us, and his usual happy-go-lucky self!

Together, we walked to his cabin with his counselor, and on the way there a slightly older boy said to us “Oh are you Mason’s parents? He’s SO CUTE!” This is just like the kind affection that I hear often at our camp said about the youngest or smallest campers in camp. It was funny to hear since Mason is the oldest child in our family, and usually doesn’t get the “you’re so cute” kind of treatment. I thought it was nice of that camper to say, though.

After gathering his things, we stopped by to say hello to the directors on our way out. They talked about how well Mason did, the friends he made, and yes that a few older campers latched on to him and thought he was “so cute!” We chatted a little bit longer and then it was time to let them do what they needed to do in between sessions (a stressful task that, as a camp director myself, I know all too well!)

We hopped in the car and I sat in the back with Mason to hear all his stories the whole way back. We also took him out to lunch to be able to spend some more time with him listening to everything.

Mason was very positive about everything, and loved explaining how things worked there — the schedule, how meals work, the activities, his basic day-to-day life.

One of his stories was about “red letter days,” which he explained were when campers were required to write letters, and for every letter written they got a piece of candy they could eat RIGHT THEN (he still talks about this and just the other day mentioned the candy on red letter days again).

Red letter days were every-other-day, and the other days he just called “letter days” where letter-writing was optional.

According to Mason, who may or may not be the next John Grisham (too early to tell), he wrote the bare minimum — one letter on each red letter day, so three total, candy clearly being a motivator here!

Interestingly, while he wrote to me and Matt twice, his other red letter day was devoted to 2017 Head Counselor Georgia. He had already been given pre-addressed stationery for the family, so in order to write to Georgia he had to march into the camp office and ask, “How do I mail a letter to Georgia at Camp Alleghany?” We thought this was very determined of him, and a little bit hilarious, too! Georgia has definitely made an impression on him and all of us!

His favorite part of camp was going tubing on the 4th of July, even though the weather hadn’t been so great on July 4th itself so they’d rescheduled the float. And, he gleefully reported, his group had such a positive attitude about having to reschedule that they were each awarded something called a Fuzzy, a token given to campers who display positive attitudes, good sportsmanship, kindness, etc.

Mason has kept his Fuzzy — a little fuzz ball creature with a face — with him since camp. It lives prominently on his dresser in his room. Quite often he’ll take his Fuzzy down and play with it and talk about what it means to him. I’m thrilled that he received this recognition and that he continues to be inspired by it.

All throughout the ride back to our camp and at lunch we kept talking about his week away at camp. When we were out to lunch, Mason asked us about the “cute” thing. He said, “Am I cute?” We just thought it was so endearing because, as I mentioned, as the oldest he doesn’t get much of the “you’re so cute” treatment. It was nice for him to be the youngest for once, to unapologetically be the little boy that he still is. Our hearts were so touched.

To be frank, there were some moments that weren’t the most positive (two kids in his cabin got a stomach bug — but Mason was spared! — his not passing the swim test as I wrote about in the previous blog in this series, and that his color team didn’t win the Olympics). But none of these seemed to phase him, he just said them matter-of-factly, like “no big deal.”

Inquiring minds want to know so…we asked about hygiene — brushing teeth, showering, etc. Mason relayed how all of that happened, and yes they were required to brush teeth every night and shower every day. (Thank you!)

Mason shared anecdotes about a couple of specific friends he enjoyed getting to know, and how he especially liked his counselors.

At the same time, he was very glad to see us and was super excited to get back to our camp —  Camp Alleghany for Girls — where he had been all summer up until his camp started, and where he has enjoyed summer life since he was born. He was happy to see everyone, and he jumped right back into camp life like he hadn’t been away.

But letting him jump back in (he participates in camp activities even though it’s a girls camp) was actually a huge mistake on Matt’s and my part.

Mason was exhausted from his camp experience, and really needed some down time and rest. I remembered (of course after the fact) that when we would get home from camp as children, my mom would let us sleep for days until we recovered. Maybe that is an exaggeration, but she definitely didn’t schedule anything for days, and let us sleep in as long as we needed. This recovery time was so crucial!

Well, whoops, we didn’t think about that.

After a happy ride home and a fun lunch out, we got back to camp in the afternoon and Mason immediately jumped on his bike to go to his activities, and ran around to see everyone he had missed.

But then…just a couple of hours later…yikes…he had tantrums and was stressed, irrational, and emotional! He’s an emotional kid anyway, and it’s always exacerbated when he’s tired. So, lesson learned! I’m rethinking the “after camp” plan for next year; Matt may take him home for a night after picking him up from camp.

I, on the other hand, opened his camp trunk out on the porch and it stunk to high heaven, so I took it all immediately to the washing machines and dumped it all in. I wasn’t expecting anything else, but this I had planned for — it just comes with the territory! 😉

In terms of what I saw in Mason after this first sleepaway camp adventure, and what I continue to see in him, well, he’s still very young, so I won’t say that going away for a week changed a ton about him. I see little glimmers here and there.

From a basic standpoint, he made his bed at ‘Ghany during the rest of the summer. Does he do that at home? Not really, haha, but if I ask him to he does without complaining and without asking how to do it.

He does have this newfound confidence that I just love. He started at a new school this year, and we have absolutely had hiccups with that transition. But he talks about camp and his experiences there, and he doesn’t necessarily put two and two together on his own (e.g. how he went to this brand new school not knowing many people, just like he went to camp without knowing anyone, and was able to make friends and navigate unknown territory and figure it out), but if he’s struggling with something I can gently suggest that he thinks about what it was like at camp when he was faced with XYZ and how he handled it then.

Mason just turned seven, so he’s still very young and learning and absorbing life and his experiences. Overall, he had a truly positive experience at sleepaway camp, and still talks about it at least once a week if not more. He’s already expressed a desire to go back next summer. That’s all I hoped for from his very first experience, so you can say I am a happy camp mom!

Download my FREE e-book, 3 Reasons to Begin Your Child’s Sleepaway Summer Camp Experience Early. It’s a great resource to share with friends, or if you are a first-time camp family and you wonder what sleepaway camp would be like for your child.