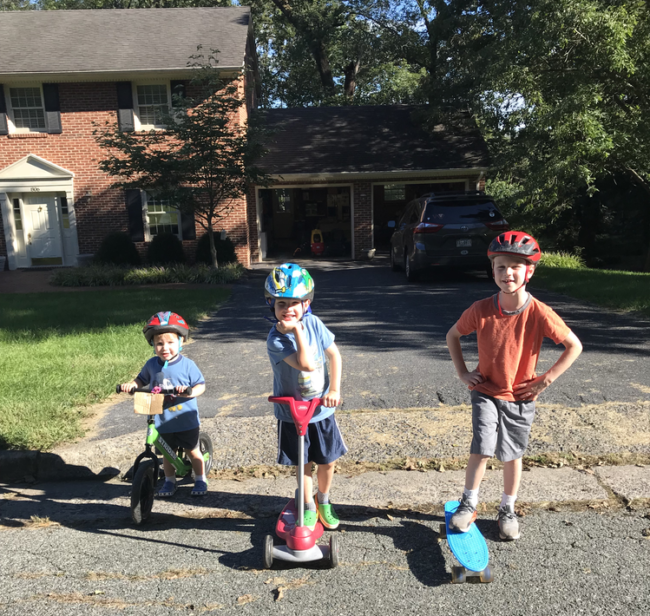 Children need to get outside and use their whole bodies in play. My three sons, Noah, Ellis, and Mason.

Editor’s Note: All this week Camp Alleghany for Girls Director Elizabeth Shreckhise is writing a blog series called Camp Fills the Need. It’s a series that addresses the huge impacts that screens are making on our kids, our families, ourselves, and how camp provides an antidote to the pervasiveness of screens in our world. Yesterday she wrote “Part 1, Research on Screen Impacts.” Today she’s writing about how, because of school demands, social conventions, and peer pressure, screens impact home life in a big way. She’ll share how she, too, has to deal with this in her own family and what little tricks she uses to tamp down screen times at home. And then finally, she’ll talk about how nature-based sleepaway summer camps provide an antidote to the omnipresence of screens not just as a digital detox, but in their own right — in relationship to nature, relationships, physicality, emotions, spirit, and sensations. So please tune in this week and follow along as we explore these important issues. We welcome feedback in e-mail or in the comments section of the blog.

I’ve had this blog for about seven years and it feels like I’ve been addressing the role of “smart” phones and social media close to the whole time.

With each passing year it just gets worse as far as the kinds of craziness the Internet spawns. Things like cyber bullying, stalking, access to pornography and alternative worlds because of the limits of parental controls, more and more of school happening online and on computers, and other screen elements, all add to the stress that screens are bringing into our lives.

Don’t get me wrong — I understand the power of the Internet as a tool of our time. My gripe probably has more to do with the fact that we invent these things and we just automatically assume they’re good even though we’re the actual guinea pigs in the experiment to see how they work out in society. There’s no meaningful national conversation on how to deal with it all, and before you know it, it’s everywhere and the horse is out of the barn, leaving people to fend for themselves in finding out how to set and enforce reasonable limits in their use even while other folks think “it’s all good” and “what’s the fuss?”

But science attests to the challenges we face, and goes one step further by talking about how screens impact kids’ development. I mentioned in a previous blog that we’re hearing a lot about brain science on screens at camp conferences because those screens are impacting our industry. I’ve also written about how low-tech life serves kids’ whole health, wellness, and yes, smarts!

More and more studies are pointing to this. Yet we also must beware of their findings, and think them through.

They also recommend an hour of physical activity each day, but I’ll get to that in a bit.

The Medium is the Message

My concern is with the modifier “recreational” attached to their findings. Now, I’m not a scientist and so what I am saying in response is more about intuition and observation and maybe a little bit of logic. But I believe it remains a valid critique anyway. 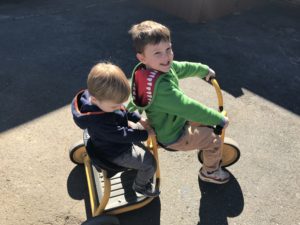 And that is that in most schools today, except some alternative ones, kids are learning more and more in a screen-based interface. While this may be “educational” where “recreational” might or might not be educational, it goes back to what media theorist Marshall McLuhan said is the essence of any communication form — he said, “the medium is the message.”

In this case, except for maybe some screen-interface games like Wii tennis or a dance challenge (which I am not recommending, just using as an example), most screen activity, whether “educational” or “recreational,” is still mostly passive, mostly sedentary, and interacts with the brain in a way that’s different from using one’s whole body and hands while in different physical or material environments of the truly 3-D kind.

In other words, as a mom and a camp director I’m concerned about kids getting 3-4 hours of screen time at school and then getting another two or more hours at home for “recreation” (most kids are not stopping at two hours). And, the overwhelming majority of this activity happens indoors. When screens are also brought along outdoors, we have to wonder, “Why does this device have to be here?”

In fact, why does it even have to be at school?

This year at my eldest son Mason’s school — and he’s only 8 by the way — each student is assigned his own Chrome Book. Forget pencil and paper and penmanship, he’s toting a computer! Mason talks a lot about doing work on his Chrome Book, or frequently, playing video games on it! 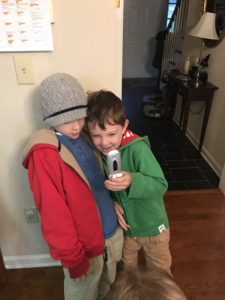 Mason and Ellis take a pretend selfie with an old flip phone — where do they even learn this stuff?

The video games are supposedly educational, but it’s more screen time, which of course I don’t love (see “the medium is the message,” above). Fortunately at this stage the Chrome Book doesn’t come home with him, which would probably make his two younger brothers want one, too. But what is happening with the device? Is Mason’s privacy invaded? His habits monitored? Is he being lured into addictive activities?

Last week Mason started talking enthusiastically about a video game he just loves. Finally I asked him, “WHEN do you have time during the day to play this game all the time?”

He explained that when they arrive in the morning they have a choice of a handful of things to do while all the students are getting there and the housekeeping things are done. One choice is play on their Chrome Book. And this was the capper. He actually said to my husband Matt and me, “Every day I come in and think about choosing a different option, but that game is so addictive that I have to play it every day!”

This really broke my heart. I want him to truly have choices, not to be driven by addictions. Something had to give. But what was I supposed to do? 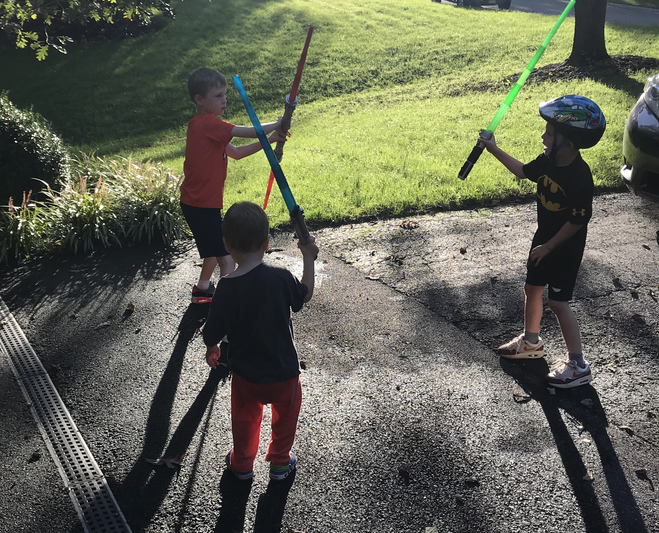 Parents have to deal with the screen, and they have to deal with what’s inside it — forces of commercialism acting on your child’s developing sense of self and the world around values and material goods. Then there’s social media bombarding them even more than our society already does about “perfect lives” and appearance and belonging or not belonging. And at every stage there’s just a mental/emotional “checking out” that can occur from constantly relying on attachment to (or worse, addiction to) the power of the screen to draw you in.

We parents face it too when our phones are our constant companion. I reached a point where I really wanted to be even more mindful about screens and tune in to how it all felt.

So around that same time last week, I noticed that the cartoons my kids watch in the morning were really slowing them down. We were having a hard time getting out of the door on time for school. So I declared that that week would be a screen-free week for our family.

That meant no TV at home, and no video games for Mason at school.

We explained to him about the addictive nature of video games, and what it does to his brain, and he really understood! He said he doesn’t want to give up the game entirely, so we came to an agreement that he could play it on Friday mornings only. So far he’s sticking to it!

As for other screens, well, Matt and I have to be on our laptops and phones for work, but our kids don’t ever (ever) play on our phones or iPads due to how I feel about excess screen time in general, and what I’ve learned through camp conference presentations and my own reading and research.

In some ways, we have a pretty basic version of “screen free” all the time at our house. But the success of our official family-wide screen free week last week showed me how important it is to do an official screen-free week as a reset button every now and then. In fact, there’s a national screen free week every spring sponsored by the Campaign for a Commercial-Free Childhood. Visit their website if you want to learn more about how to bring this vital program into your child’s school life, your church, community, and home.

My kids made a list of various soundtracks and songs they wanted to listen to in the mornings when the cartoons weren’t on, so that has been fun. It also means I can sometimes easily say, “Hey boys, let’s do songs this morning instead of cartoons,” and make that a positive alternative in our family’s bag of tricks.

My boys are young, so in some ways my battle at home has just begun. But being in the outdoor education industry, I know the power of the outdoors, of the good old fashioned, “Go outside and play.” And when they’re all old enough to do so freely, without parents/babysitter, there will be plenty of outdoor play that I insist upon!

And moreover, there will be sleepaway summer camp, the power of which as an antidote to all this screen time simply can’t be overstated. And I’ll write about that tomorrow.