Begun in 2018 and two years in the making, our video of Vivian's camp journey could be the story of any camper — her uncertainties, her eagerness, her challenges and her joys — in being a first time camper at 'Ghany! 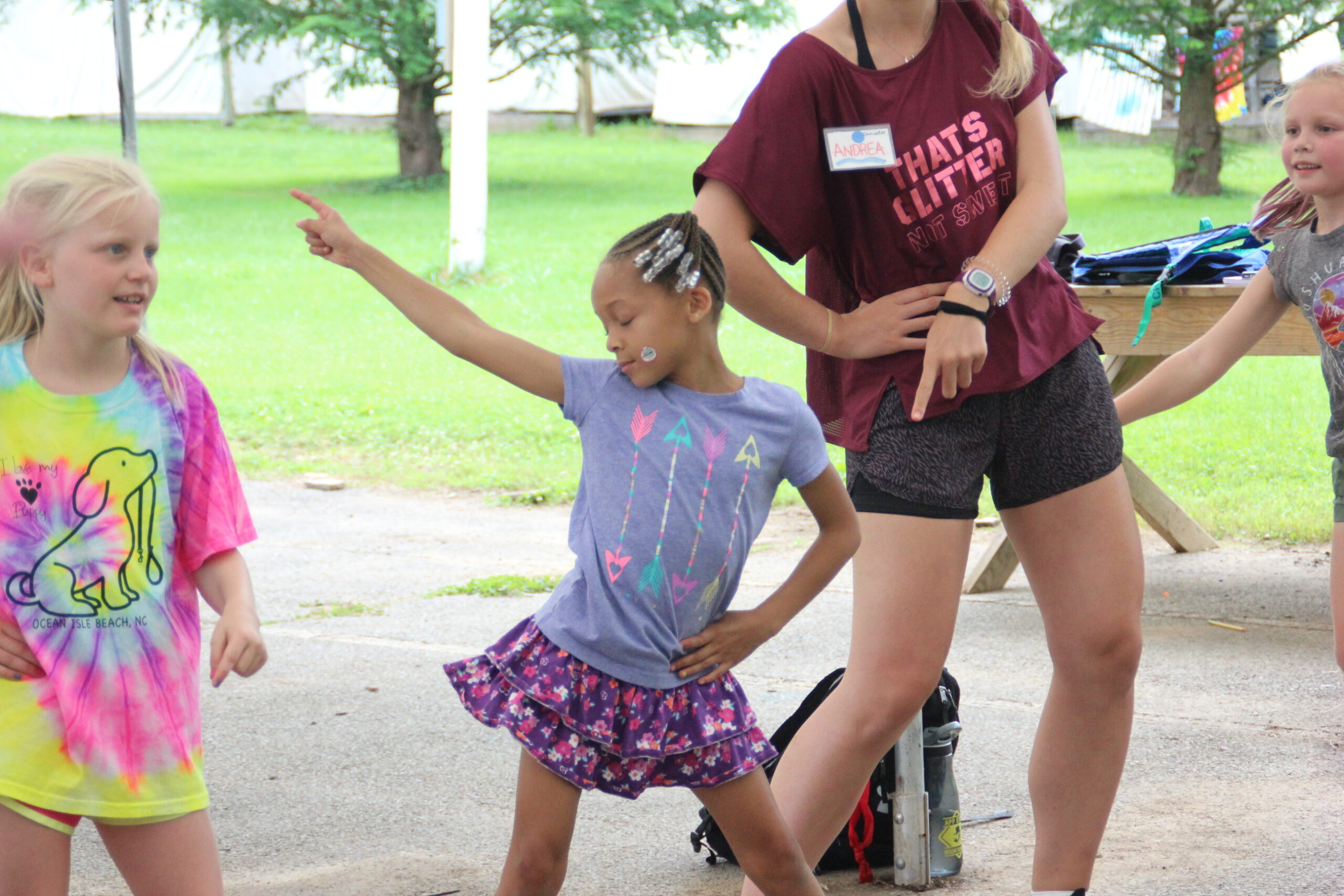 I’m so excited to at long last have a formal release of our featured camper video! I say “at long last,” because we actually started making this video in the fall of 2018!

It started with the idea of featuring just one camper as a great way to tell our story simply. We chose our camper, who was coming to camp for the first time the next summer. We were (are) so excited to feature little Vivian, the younger sister of Morgan and Coever, two longtime campers, at her first time at camp. When her parents, Hilary and Craig, agreed, it was all systems go!

So we secured a filmmaker and started to plot out the timing of everything.

The next step was for post-production — editing, titling, and any finalization of the video in late 2019 and early 2020 — to release it in the late winter or early spring of this year.

And then COVID hit the world and releasing a video touting the merits of camp and what first time campers might expect seemed ill-timed given the gravity of the situation and that we didn’t even know if camp would happen.

So while the video did get an informal release — just some folks sharing on social media and adding it to our new website — we never had a big, “WOOHOO, our new video featuring Vivian and her family is released!”

That brings us to today. We’d really like to have that big release to honor the Dixon family’s participation in this project, as well as to share what we think is just such a sweet story of the kinds of uncertainties and joys a new camper can feel, even if her older sisters have come to camp before her.

Without further ado here is the formal “drop” of the video — A ‘Ghany Girl’s Journey — as well as a few words with the Dixon family about their participation in making it.

The Dixon Family’s Journey, Too

In a follow up with mom, Hilary, I wanted to learn more about their view of sleepaway summer camp, and why they had originally chosen Camp Alleghany for Girls for sisters Morgan and Coever. Turns out that Hilary had her own camp memories.

Growing up, I did not go to sleepaway camp until I was a teenager. I had a very difficult time with homesickness, but once I overcame it, I thoroughly enjoyed myself. I remember thinking that when I had a family, I would want my children to have a summer camp experience where they could build friendships and strong memories from a very young age.

Though they live in McLean, Virginia now, Hilary first learned about ‘Ghany when she lived in Norfolk.

One of the teachers at Morgan’s school had a ‘Ghany Girl bumper sticker on her car. I asked her about it and she said that not only had she been a camper, her children were as well, and that she herself had returned to ‘Ghany to be a Tent Mom (Mini Camp Counselor) to younger campers.

Her description of Camp Alleghany — everything from the location, the activities, the people — sounded amazing and the sort of place I wanted my girls to experience when they were of age.

And we’re so glad they did! Having Morgan and Coever at camp has been such a delight. The two older girls have each attended Mini Camp, and then Term Camp, and have been campers with us for five summers.

As each of us knows, when little sisters get to see what big sisters are doing, it’s not long before they want to do it, too. And we were all wondering when Vivian would be coming along, too. As Hilary explains it,

Vivian has said goodbye to her sisters when each of them attended Mini Camp. She was always eager for them to return. When the older girls attended Term Camp, Vivian came on Opening Day, often running around with the young campers as we set up her sisters in their respective tents.

By Morgan and Coever’s third year, campers and counselors alike were asking when Vivian would be able to stay for Term. Finally, the time came for her to follow in her sisters footsteps and attend Mini Camp. She attended Second Term later that same summer.

That summer was #summer2019, when the video was filmed. And though she was young — a rising 2nd Grader — Hilary wasn’t really worried.

Vivian has very strong personality and is a very independent young lady. We weren’t concerned about her with respect to feelings of homesickness or making friends.

While Term Camp was the first time she had been away from us for an extended period of time, we were comfortable knowing that not only was she in good hands with the staff at Alleghany, but her sisters were right there with her.

Every camper’s experience is different, so I wondered if Vivian experienced any challenges while at camp that she shared with mom and dad. But it seems it was pretty much smooth sailing both at Mini Camp, and when she came back for Second Term later the same summer.

Vivian would write short notes home that she was ready for camp to be over, but I believe that those stemmed from quiet time she when she wasn’t engaged in activities. From the photos I’d seen and the letters I received from her sisters, Vivian was having fun.

As always, as in our post-camp surveys, or when I have a chance to talk with a family more in-depth about their daughter’s experience, I wondered what was the top takeaway for Vivian after her first summer at ‘Ghany?

Vivian’s interest in bugs was greatly solidified during her time at camp. She has a fondness for creepy, crawly, winged things and takes particular delight in finding them, learning about them, and making sure they stay outside where they belong. (Hilary’s own website has a blog post that includes Vivian’s letter home about her bug friend, Poppy).

She also learned that while she can survive three weeks without electronics, she’d rather not! 😉

That’s good new for us — we love all our unique campers – but also for the Dixons, who truly value the camp experience.

Camp Alleghany has been an outstanding experience for all of our girls. The camp atmosphere allows them to grow individually, learning new skills like Archery and Rifle, and as well as refining others, like Green Room and Swimming.

They build friendships that carry over once camp has finished. We moved from Richmond to McLean last summer and Coever made friends with fellow campers who turned out to be future classmates at her new school.

The girls also have grown as sisters. They have had an experience, independent of their father and me, full of inside jokes, adventures, and just wonderful memories that are unique to ‘Ghany Girls.

I hope you’ve enjoyed the Dixons’ — and Vivian’s — story as much as we enjoyed planning it, filming it, and bringing it to you! And so many thanks to the Dixons for participating in this process, as well as all the follow up and context for this blog. Not just to the parents for agreeing, but for all three sisters who gave so much time and enthusiasm to the project, including being pulled out of a couple of activities at camp so we could do the filming.

It was a lot of time to give, and we really appreciate the Dixons so much!

However you come, we want to nurture your experience, and be partners with you in the journey. I hope you’ll download my free e-book* Three Reasons to Begin Your Child’s Summer Camp Journey Early, and that you’ll reach out to me if you have any questions.

Our 2021 Registration is open, but due to COVID cancellations leading to lots of enrollment rollovers, we’re already about 75% full. So register now if you’re interested.

I hope I’ll see you on the banks of the Greenbrier River next summer. Until then, Happy Fall!

*If you want to learn more about the merits of sleepaway summer camp, download my FREE e-book, 3 Reasons to Begin Your Child’s Sleepaway Summer Camp Experience Early. It’s a great resource to share with friends, or if you are a first-time camp family and you wonder what sleepaway camp would be like for your child.