Some of the hardest workers at Camp Alleghany are the guys on the Green Team. In this 1981 piece, we have a rare example of a Green team member contributing to the Alleghany Rattler.

In this piece, we have a rare example of a Green team member contributing to the Alleghany Rattler. The interviews and details give much insight into the kinds of guys who worked at camp in the 1980s, as well as large loomed Cooper Dawson in the camp culture. The official Green Team (outside of regular camp maintenance) began in the early 1970s. 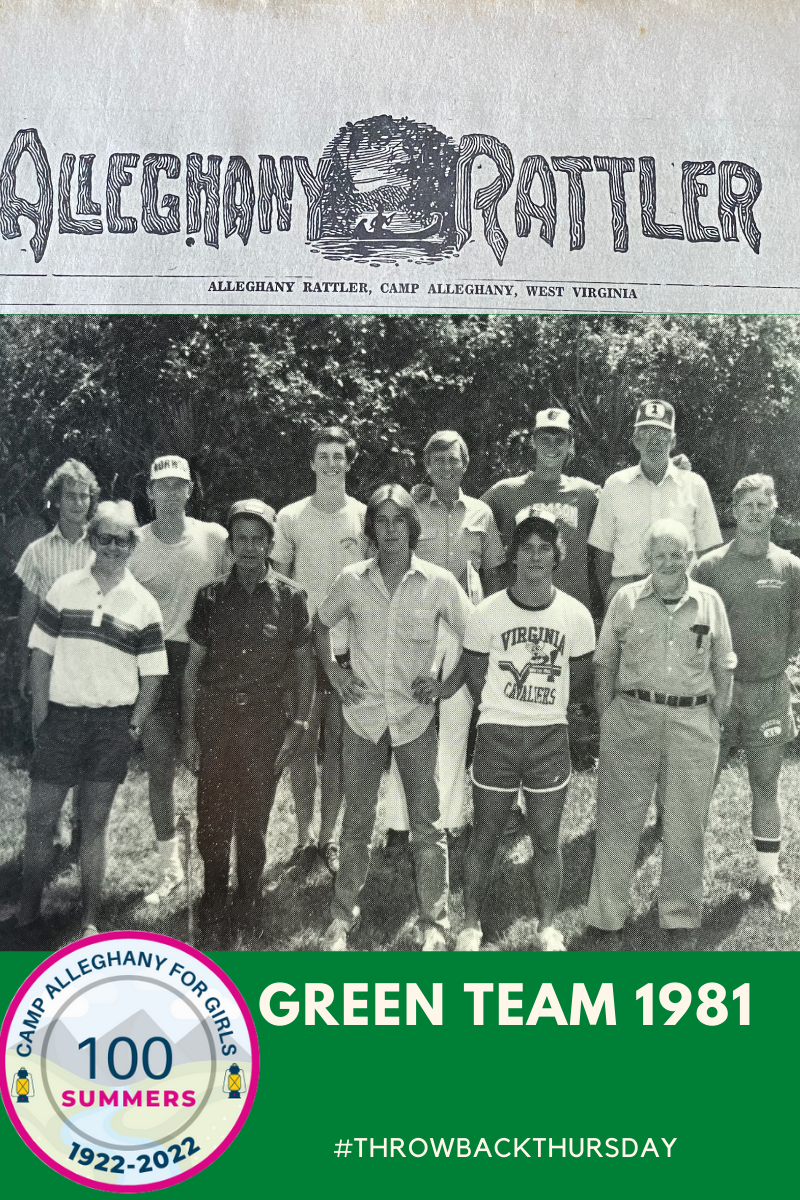 The Green Team is a small band of young men who are determined to keep Camp Alleghany running smoothly underneath all of the fine efforts of the counselors, campers, and Cooper Dawson. Here are some interesting facts about each Green Team member.

Bo is 21 years old and lives in Petersburg, Virginia. From September to May, Bo attends Norwich University in Vermont. At Norwich, Bo studies P.E. and Business. He enjoys ice hockey, boxing, and he is a member of the school’s rifle team. Also, Bo is a short order cook at the snack bar on campus.

Steve is 19 years old and lives in Greenville, South Carolina. From August to May, Steve attends Clemson University where he studies ceramic engineering. Also, Steve is active in the Lutheran Church as an officer of the Lutheran student movement.

As a member of the Green Team, Steve is one of the outside workers. Steve says that he does everything to keep the place clean and running smoothly. Steve told me that he’s known Mr. Dawson for three years and since then he’s found him to be demanding, generous, outspoken, but most of all a father to these girls, someone they can look up to. When asked about the camp itself, Steve said he enjoyed offering his services and said it was one of the most beautiful spots in the world.

Duncan is 19 years old and lives in Elizabeth City, North Carolina. From September to May, Duncan attends Elon College. At Elon, Duncan is studying business and he enjoys going to football games.

When I asked Duncan about Cooper Dawson, he told me that he thought him to be very active and reasonable. Also, he told me that Mr. Dawson was a close and dear friend to their family and has been for many years.

Kurt is 17 years old and lives in Cincinnati. From September to June, Kurt attends Aiken High School where his favorite subject is drafting. Kurt plays tennis and baseball.

Kurt works as one of the dishwashers here at Camp Alleghany. When asked about Cooper Dawson, Kurt told me that he thought Mr. Dawson was very demanding, but if you can look through that you would see his heart of gold. After asked about Camp Alleghany, Kurt said it is a great place and change of scenery. He also said, “You can’t beat this place, it’s a girls’ camp.”

Cliff, an 18 year old, lives in Byron, Georgia. From late August til late April, Cliff attends Clemson University. At Clemson, Cliff majors in economics, is on the spirit committee, and is a member of the fraternity Pi Kappa Alpha.

As a member of the Green Team, Cliff is in charge of the upstairs Dining Hall. When asked of his opinion of Mr. Dawson, Cliff said, “I think Cooper Dawson is one of the finest and most upstanding gentlemen that I have ever had the pleasure of encountering.” When asked about Camp, he said it provides a unique and challenging experience for all who are associated with Camp Alleghany.

Lee is 17 years old and lives in Lynchburg, Virginia. Lee attends Episcopal High School from early September to early June. At Episcopal, Lee enjoys studying Calculus. He also participates in football, basketball, and lacrosse. Along with sports he is the assistant editor of the school newspaper and photography editor for the yearbook.

As a member fo the Green Team, Lee works the downstairs Dining Hall. After asked, Lee said he felt Mr. Dawson was a fine gentleman, very just, and fair. He said that Cooper Dawson was loved by all who know him. When asked about Camp, Lee said it was hard work but very fun.

Will is 17 years old from Virginia Beach. From early September to early June, Will attends First Colonial High School. At First Colonial Will is the number two man on the Golf Team, and enjoys Government and Economics.

Will works as a dishwasher in the Kitchen. He stated Mr. Dawson as a man of many fine qualitiies, smart, fair, and always quick to make a decision. Others may disagree, and may be right, but he always gives 100% for Camp Alleghany. In his opinion Camp Alleghany is superior to Camp Greenbrier, even though he has spent many summers there. He feels the quality of the campers and counselors is far better.