You are here: Home / Directors / Camp Clean-up in the Aftermath of the 2016 Flood 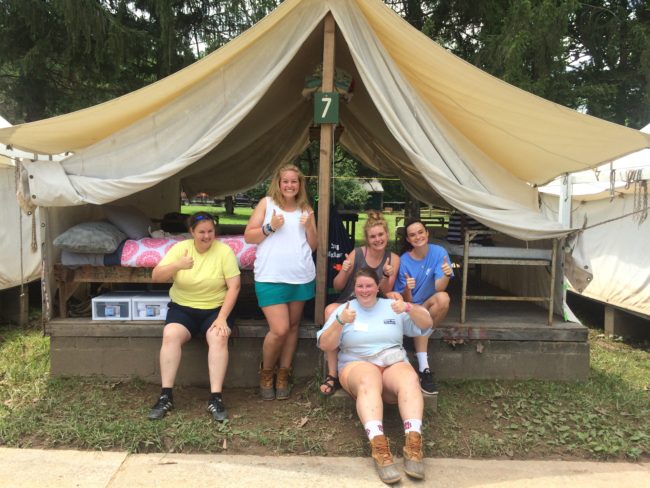 Senior Camp Counselors are back at camp and getting ready for First Term on Sunday. Photo: Elizabeth Dawson Shreckhise.

It’s been a week and a day since the torrential rains made a temporary lil’ swamp out of Junior and Senior Camps in the great West Virginia Flood of 2016. (To read the story of how we prepared for the rains and river rise, and took care of our Mini Campers, read our earlier blog on that from this week.)

Though rising waters had retreated within about 12 hours, by about 2pm last Friday, clearly the storm left its watermark…and mudmark! We needed to do a big time clean up, some repairs, and focus on getting back to the season, our #95thSummer as a camp.

And what can First Term, Second Term, and Family Campers expect in the wake of the flood? I hope to fill in as much of that as I can in this blog post today.

So put on your puddle jumpers and dive in with me!

Here’s mud in your eye!

The main issues that we were looking at were the fact that our main entrance road on the camp side of the river had become a creek, and that there was MUD everywhere! (The other side of the river, on Storehouse Road, is fine.)

I’d like to think that there’s some potential to be a Spa somewhere in there — luxury mud baths anyone? But muddy tennis? Muddy archery? Not so much!

Garrett actually was able to get a simple road made by Monday by using some equipment to shove rocks out of the way that had washed in. The entrance of camp will forever look different to those familiar with it.

Earlier this week we still had a LOT of work to do, but the main goal was to be able to get a truck driving on that road so food can be delivered, trunks moved through, and other access. That’s happening (yes to food and trunks!) and yet is also a work-in-progress in terms of continually improving our use of the camp-side roads.

For those long-time Alleghany people, imagine Crystal Creek now flowing behind Cowbell and down into the entrance of camp, rocks and all! Clearly Mother Nature has carved (and will continue over the years to carve) her place in the landscape of Camp Alleghany and we will adjust and move with her.

The tents had a lot of mud in them, so we power washed the platforms and canvas tents, as well as sanitized them. Then, in spite of some intermittent rains, left them to dry out.

A handful of tent floors out of our 68 tents needed to be repaired, tested, and put back in place, as well as a handful of tent poles. That’s been done. But thankfully the majority of our tents stayed upright and intact, with only a handful pulled down by the current.

The Tennis Courts had layers of mud on them — unfortunate after our L.O.L. Weekend when Alum hubby Joe Duane had so lovingly and masterfully just power washed them days prior to the flood! Ugh!

Tennis is one activity area that may not be ready to begin right away. A couple of courts are almost ready, but all six won’t be ready by Sunday. We’re getting there, and have some great people spending dedicated time on re-sprucing up the courts, so we will get there.

The Rifle Range needed some gravel and a little TLC but it should be fine as the ground absorbs the water, and the sun dries things out bit by bit. Expect the walkways up there to look a little different what with Mother Nature re-aranging some rocks and such, but otherwise it’s good to go.

Swimming and Canoeing should operate as normal, possibly without docks, but as long as the Greenbrier River is down at a normal level and the water is clear, we will get in it!

Just as every year at camp we watch the river levels on a daily and every hourly basis at times (depending on weather and upstream conditions), we’ll do the same, monitoring it hyper-regularly. Going forward with the summer, our river life and Waterfront Activities won’t be any different just because it came up so high during the flooding incident.

The river is always fluctuating, has already retreated and normalized in certain ways, and we expect it to otherwise be a normal summer of daily monitoring for height and current before authorizing that day’s water activities.

Now, there will be MUD, MUD, MUD everywhere in camp, all summer long. Everyone coming should be prepared for soggy ground. We hope it will dry up, but it’s so saturated that even with normal rainfall added to the ground, it will continue to be soggier than usual. We want everyone prepared so ‘Ghany Girls, bring those boots!

Our roads in camp (the Camp side of the river) are still rocky, gravel-y, muddy, (the Admin Team and Garret’s crew drive on these with the golf carts, etc.) and we’re still working on getting them more ready for Sunday (and will continue to work on it beyond).

For those familiar with our camp side Barge drop and entrance, Garrett rebuilt the fence along the bank and it’s further back now, so that will look different — and NO ONE is allowed on the other side of the fence!

The fence is acting as much as border as guard as the areas beyond are not fully safe at this time. Of course campers are never really near this, except in the way general vicinity (but not actually near) during Opening and Closing Day drop-offs and pick-ups. But NO daily Camp programing takes place here. 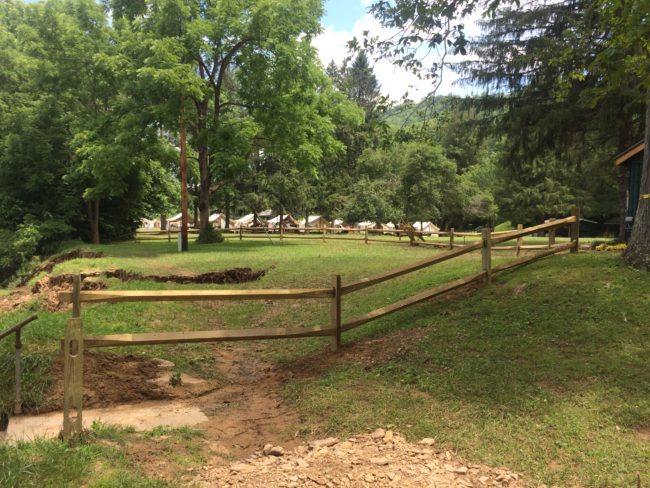 The Irony, The Irony!

One thing that’s so vexing to us this year is that Camp Alleghany had never looked better!

Between various camp enhancements (read our off-season blogs about facilities), our on-schedule realization of those projects this year, and our super successful L.O.L. Weekend, camp was literally sparkling. 🌠

To see some of those things take a hit, get soaked in mud, or need a repair is a bummer, even though it’s just appearances. As far as the safety and health of camp goes, a rapid response by our Facilities Director Garrett O’Dell and his stellar team, has meant that all this stuff is getting back to snuff for camp use this year.

But still — boo hoo — camp isn’t going to look as pretty as it has, or as it would have! I guess we can say, “Here’s mud in your eye,” and interpret it as good luck instead of bad!

Hey, it’s still Camp Alleghany, right? Home of 95 Summers! where girls and young women..waded in mud, and ran over hills and dales, and were cooed to sleep by the river’s voice and crickets chirping under a canopy of stars in the lovely West Virginia wilderness.

With an amazing team of counselors ready to make it an awesome experience, our slightly truncated First Term will be two weeks of muddy magic, and our Second Term will enjoy all its expected delights as well.

All campers this year should focus on bringing old clothes that you don’t mind getting muddy, and pack those boots!

As far as our 50th Anniversary of Family Camp goes, well there’s still room to register so we hope you’ll think about coming to spend some time with us. Just register here. 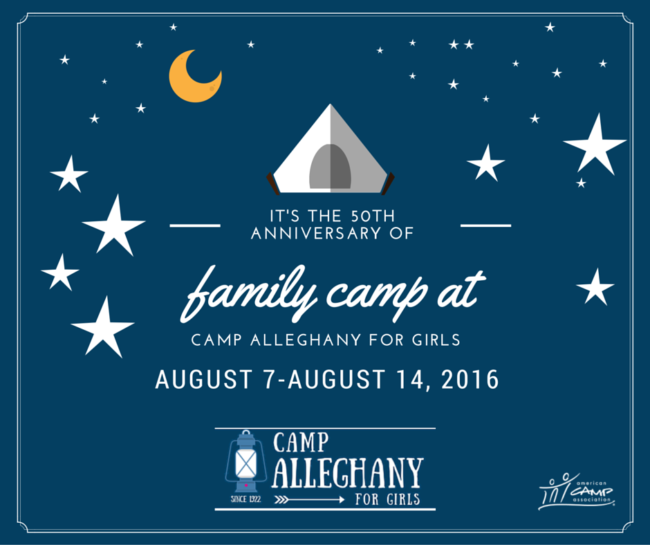 Finally, Greenbrier County was experiencing an alert to boil their water first before drinking it, but we’re on a well that Garrett tests daily, (as he does anyway, btw), and our water has remained fine. I believe some but not all parts of the county alert has been lifted by now anyway…but either way, it doesn’t affect us.

And one last thing to note, if the phrase “state of emergency” for West Virginia makes you wonder, please be aware that except when an absolutely acute event is taking place, that designation in the wake of extensive damage is largely a bureaucratic term designed to help deliver aid and coordinate teams in a way that bypasses usual government rules.

Getting a “state of emergency” declared allows counties, cities, states, and the federal government to move into fast action on things like coordinating between jurisdictions, deploying the National Guard quickly to provide a labor force and supplies, releasing money quickly through emergency funds or agencies like FEMA so that repairs can begin immediately, regulations to stop any price gouging across a huge swath of suppliers (from lumber and hardware to food and water), announcements like boil notices on water systems, and other types of action that allow for efficiencies and fast-tracking along with specifically regulated communications and orders.

These designations last far longer in the aftermath than the actual acute conditions of a weather event where motorists are, for example, told to stay off the roads altogether, or people are told to shelter in place. So while “state of emergency” sounds dramatic, and in the case of some fallout it is or can be dramatic, overall the declaration is less about immediate danger and more about the facilitation process.

First Term at Camp Alleghany is slated to happen this Sunday, July 3rd, though we have post-poned our Independence Day celebrations and Carnival to Saturday, July 9th just to give a little more time to get back to normal.

We’re in e-mail communication with First Term families about transport, highways, the Barge, and other details that would be boring on the blog and…we can’t wait to see THEM, their girls, and if you’re coming for Second Term or Family Camp…YOU!