We’re All About Friendly Competition

Color teams and friendly cool team rivalries are a long-held tradition at Camp Alleghany. Our intern blogs about the origins and the ins and outs of it all. 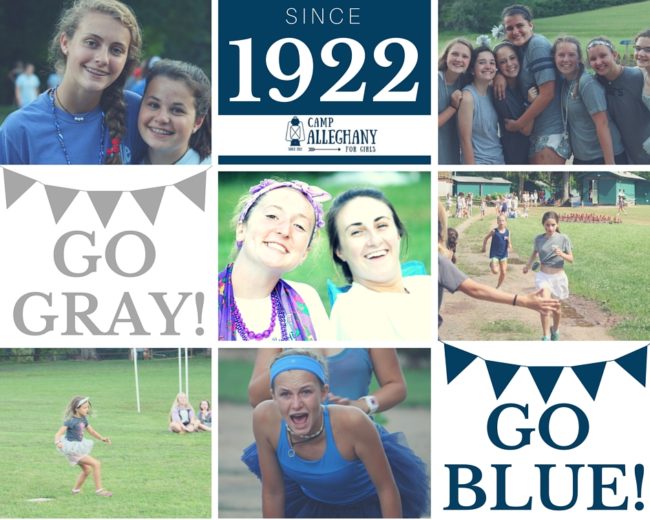 The Blue/Gray rivalry at Camp Alleghany for Girls dates back to camp’s first year, 1922, and continues to be a favorite camp staple with campers and Counselors alike. The Blue and Gray color teams are an Alleghany tradition that promotes friendly competition and sportswomanship, following the principles of our Honor Code, found in the Camper Code of Conduct. Harkening all the way back to 1922, there’s a banner hanging in the Play Hall that recognizes the color team winner of each summer’s cumulative rival events.

Keeping It In The Family

Within the first week at camp, new campers are assigned to either the Blue or the Gray team, a member of which they’ll remain for life. New campers who’ve had previous family at camp (older sisters, mothers, aunts, cousins, even grandmothers!) will carry on the family tradition and be assigned the same color as that relative. This makes the bond within each team that much stronger! First time campers with no family members could end up on either wonderful and team-spirited color team.

My sister, Rebecca, is a 16-year-old camper this year and she has always enjoyed cheering on our team with me by her side!

The Blue and the Gray

Campers participate in Blue/Gray events throughout the summer in activities such as the Swim and Canoe Meets, matches in Rifle, Archery and Tennis, and in games including relay races, capture the flag, trivia contests and more.

Blue and Gray aren’t just teams here at camp — it’s a visible color war! ‘Ghany Girls go wild with their costume choices, utilizing their creativity and imagination by donning wigs, scarves, jewelry, boas, face paint, and crazy outfits to cheer on their teams and show their unity. It’s so exciting to see what these girls come up with to enhance the tradition!

At The End Of The Day

After each Blue/Gray competition, teams take turns singing their respective cheers to the other team, but then complete the night but hugging a member of the opposite team. Once this is done, the rivalry part is officially over for the night and points can be deducted for unsportswomanlike conduct…this even includes singing Blue/Gray cheers after the events are over!

As you can see we take Blue/Gray competitions seriously, playfully, joyfully, and by the book. It’s one of the most bonding things we do as a camp, both as color teams, and as friendly color team rivals!