We tried a new camp conference this year in addition to the American Camp Association's National gathering. I report back on what we learned! 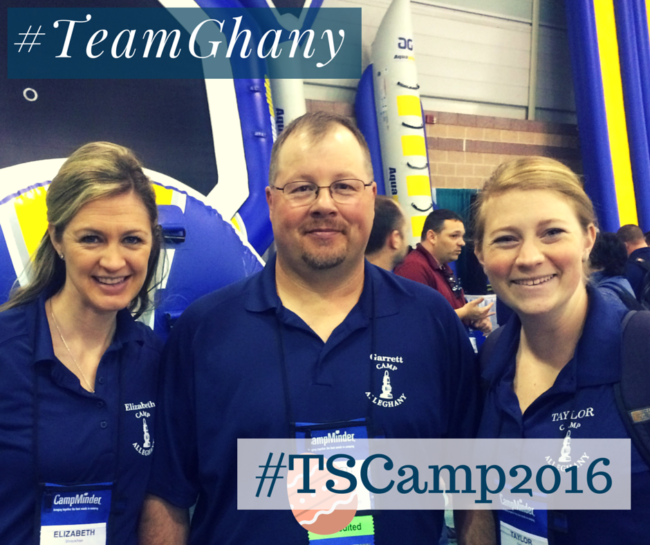 We finally got to go to the American Camp Association’s (ACA) Tri-State Camp Conference, a large and popular camp conference that happens every March in Atlantic City. I’ve wanted to go to this conference for several years now and finally this year it happened!

Not only have I not been to this annual conference, but no one from ‘Ghany had ever gone either. But I’d always heard such good things about it that I was eager to check it out.

The Tri-State event is actually larger than the National ACA conference in terms of number of attendees and exhibitors, and is put on by the ACA New York and New Jersey section.

Tri-State is always held in March, whereas National is in February. March is a more difficult time for me to attend but I made it work this year anyway .

When the ACA National was in Atlanta this year, there was minimal interest from our team in going, since it was just so recently in Atlanta. So we thought this would be a good year for a few of us to try out Tri-State (lucky me, I got to go to both — I don’t care where ACA National is held, I love it regardless!)

Our Facilities Director Garrett O’Dell learned that Tri-State has a track specifically for facilities managers so he was eager to go here instead of another round at ACA National.

And our Program Director Taylor Fellows recently went to London for an international counselor recruiting trip that was in close proximity to the ACA National event, so it also made sense for her to join us in trying out Tri-State this year instead.

The three of us hit the road on a Monday morning and drove straight to the Atlantic City Convention Center (same place as Miss America!) with no traffic or issues, and checked into the Sheraton Hotel connected to the convention center.

This was the first big difference in the two conferences — National is always held in a hotel conference center, and most everyone stays in that same hotel. At Tri-State folks are spread out among different hotels around the city. That can be hard because part of the pleasure is in everyone being united in one hub, but we still did get to interact with other camp professionals, of course!

We wandered over to the convention center to check in and get our bearings. It was HUGE! It seemed very overwhelming at first, but we were assured it would make sense after the conference got started. It was close to dinner time so we hit a nearby restaurant, and while waiting for our food we downloaded the Tri-State app to check out which sessions we wanted to attend.

The format was similar to National in that there were many sessions offered at one time, making it hard to choose from so many great offerings! But with three of us, and different interest areas, we could fan out and take many different sessions.

The day got started bright and early Tuesday morning with our first session. We all noted just how many people seemed to be there — the numbers were overwhelming!

Something else that was a little overwhelming was not knowing anyone, at least at first. We eventually started bumping into other camp professionals we knew, but I think since it’s just such a large conference it was harder to see people we knew.

Also, since I’ve been attending National for so long, I’ve made friends that I see there regularly, and I also find that more of the camp professionals that I know personally also attend National, so when I get there it feels like a wonderful reunion!

At first Tri-State felt quite the opposite. I’m sure it was like what a brand new camper at camp must feel like! It seemed like everyone except us knew exactly where everything was, knew the ins and outs of everything, and we just sort of wandered around at first, trying to figure it all out. It was new and exciting but with an air of a little uncertainty.

The other thing that made me feel a little bit like a fish out of water was the fact that geographically speaking, it seemed the majority of the people there were from Pennsylvania and points north — camps from Maine down to PA.

But just like a new camper, soon we were immersed in the program and learning too much, having a good time, feeling very engaged, that the real meat of the matter — the conference content — soon had us feeling like part of the program!

And the actual content of the conference was amazing! I got so much out of it.

Going somewhere new allowed me to attended unique and different types of sessions than I normally pick. For example how to run meetings more efficiently, or how to set up a system where you as the director truly know how all of your campers, individually, are doing — love it!

There were a lot of presenters I’d never heard of before, and then some old favorites such as Steve Maguire, Scott Arizala, Chris Thurber, Michael Brandwein, and more.

Taylor and I had a lunch session with Michael Brandwein where he gave us several really fun ideas to incorporate into camp meals (not the food, but just things to do at meals to engage our camp community!)

I went to a session on how to present your camp in the best way possible — whether at a camp fair, or just talking to someone interested; and I also attended a very powerful session on girls and the importance of camp in girls’ lives (not going to hide it — I cried more than once in this one)!

‘Ghany on the spot!

I think the highlight of my time in sessions was when I attended one that Steve Maguire did on new and different ideas to incorporate into staff training or just your summer in general. About the 4th or 5th thing he talked about, he said “I got this idea from a camp in West Virginia, I think it was Alleghany.” So of course when I heard this I cheered very loudly (all by myself – Taylor and Garrett were not in this session with me). Well Steve decided I needed to come up to the front to help him present this idea in a room full of at least 200 people (maybe more!), none of whom I knew!

The funny thing he was talking about is just an old camp tradition we have at meals, where a group of people or a table will call out “ALL CAMP _____” and the last part could be anything at all: bubbles, roller coaster, sleepy turtle, I mean ANYTHING. Then the rest of the Dining Hall will act out whatever it is that was called. The idea is that it’s just this funny tradition that campers started, but that everyone can participate in, or even have ownership in if they make up their own little thing to act out.

So there I am, microphone in hand, trying to explain this to a huge group of people. I think it was successful, but my cheeks stayed red for probably an hour after that! Later Steve sent me a text to thank me for letting him put me on the spot!

Overall the sessions were really wonderful. I got so much out of them, and between the two conferences I’m just bursting with ideas and excitement that I can’t wait to implement this summer (get ready! it’s going to be awesome)!!

The exhibit hall at Tri-State was indeed bigger — again, a little overwhelming at first, and we couldn’t get through the whole thing the first time we went in! Took us a few times.

Slowly we started seeing vendors and exhibitors we knew, so that was nice, but we also encountered some new exhibits we hadn’t seen before, but were very cool ideas! One thing we kept encountering were vendors telling us that we (West Virginia) were too far away for their services. So again it felt like the conference was more catered to north of the Mason-Dixon Line!

But we still got a ton of great ideas and saw some new things we’re excited about.

Taylor attended a lot of programming and staff training sessions, and Garrett went to kitchen and facilities sessions. I think the three of us got a lot out of the conference, which ended Thursday.

In order to try to avoid some traffic we actually left before the closing keynote session, but still attended a couple of morning sessions and got some last-minute time in the exhibit hall.

We got home safely that evening in time for dinner.

As to which conference is better? I really can’t say. Some people absolutely love one over the other and vice versa. I’m surprised that people feel so strongly one way or the other…to me, they’re apples and oranges, and a great complement to one another if you really want to get your camp pro geek on (which I, admittedly, do!).

Sure, I know more people at National, and I’d say I probably like the “feel” or vibe of that one a little better, because it’s familiar to me. But that isn’t to say I wouldn’t attend Tri-State again. Although to be honest, the timing in March is really not ideal for my family (Matt’s work is so insane in March, that we had to ask my parents to help a lot with child care, to the point of actually Matt and the boys staying over at my parents’ house the whole time I was gone), so it may be a while before I can attend Tri-State again.

And while I felt so lucky to go to both conferences, it’s been a lot of time away from home and work (even though it was work-related, the emails and projects piled up!), so I’ve been scrambling to catch up. So I’d say attending both big conferences isn’t going to happen on a regular basis.

There were some speakers at Tri-State that I’d like to see come to National, and same with some exhibitors, so I suggested that in my online evaluation of Tri-State.

But the bottom line is that both are great conferences, I couldn’t recommend one over the other, and am so excited about the ideas I got from both!

It’s been a huge year of new learning for me, which is great since last year I was too sick with a flu to attend National at all. I’ve definitely been making up for lost time this year and it’s all going into the hat to pull creative and business-minded ideas out to implement at our beloved Camp Alleghany!