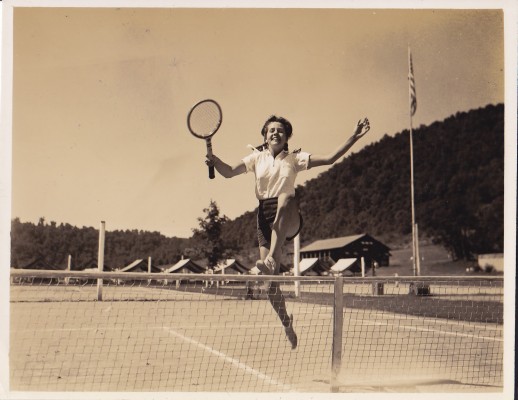 The recent Olympics in Sochi, Russia reminded me that we here at Camp Alleghany have an old tie to Russia. Way back in a 1941 edition of The Alleghany Rattler there’s a story on the front page about Captain Yvorsky, that summer’s tennis instructor. It’s filled with daring details from Captain Yvorsky’s bio and I couldn’t resist sharing it with you. So take a glance back to the past, all the way to July 22, 1941.*  Enjoy!

Alleghany campers this year are very fortunate in having as our tennis instructor Captain Valerian Yvorsky, who can be seen twice a week on our courts urging forth our fighting spirit.

Yvorsky was born at Odessa in Russia. He became a captain of the Sharpshooters in the Russian Imperial Army, fighting for three years in the World War I, 1914-1917. War between the Red and the White Russians broke out at this time, and the captain fought for the next three years as a White, still as a leader.

The war area covered the entire eastern front of Russia and down into Crimea. Yvorsky during active service was wounded five times, decorated with honor seven times.

In 1920 war broke out with Turkey lasting two years. In 1922 at the advice of Admiral Bristol, in command of American forces in the East, Valerian Yvorsky came to the United States.

For six years Captain Yvorsky was a professor of tennis at the Nipnichesen Club in Spuyten Duyvil, New York City. For thirteen years he has instructed at Greenbrier in the summer; for seven years the Boca Raton during the winter. Five years have been spent at the St. Augustine Club. This year Alleghanyites claim Valerian Yvorsky as one of them.

Any one of us can now get from the captain all of his enthusiasm and fighting sportsmanship that we can hold. Nothing need be said for a man who has won championships in seven countries, and two hundred other prizes.

All will be pleased to know that Captain Yvorsky is an American citizen of the best.

The things we find as we plumb the nearly century of Camp Alleghany’s existence. It’s astounding!

And one more thing, it just so happens that we’re still looking for a Head of Tennis for this year. You don’t even need to be a war hero to get the job, (but you could be). But you do need to be a woman (sorry guys)! Apply today.

*Click on the The Alleghany Rattler link below this story to read more from our archives.