The Counselors Save Christmas — A ZOOM Call Story

An upside-down Christmas story to keep the 12 Days of Christmas season going strong... 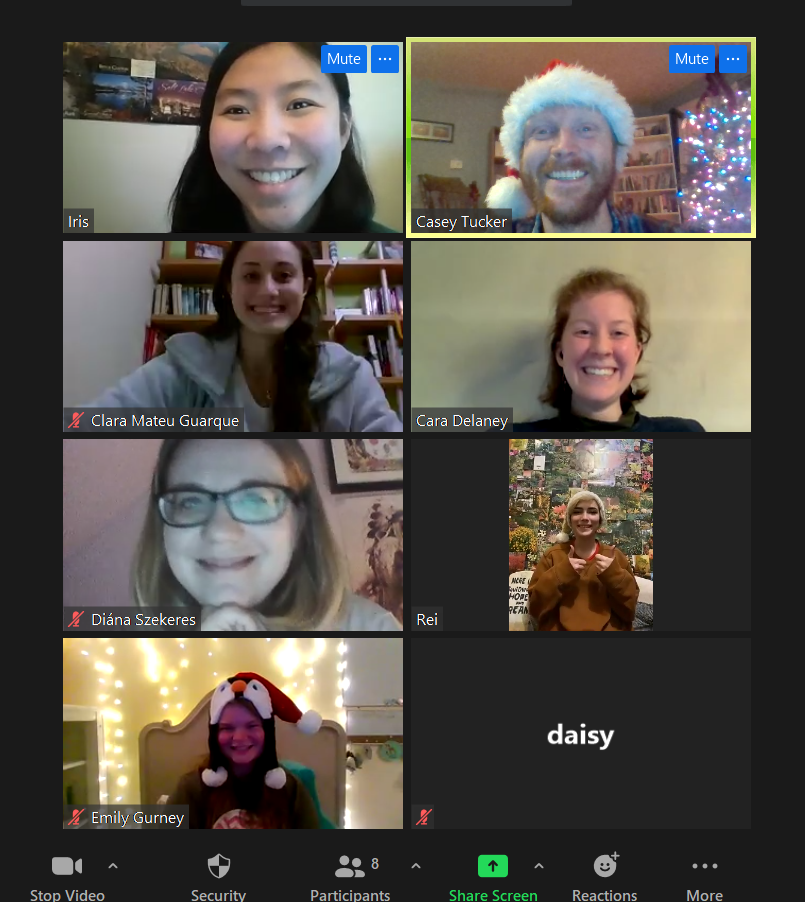 Editor’s Note: In the spirit of The Twelve Days of Christmas, where Christmas doesn’t really end until January 5th or January 6th depending on how you count Twelfth Night…we present you a story for the season. This story was part of a Counselor ZOOM Call Party. and it was a wintery version of a ‘Ghany-style Campfire story where each participant could only add one sentence when it was their turn. What resulted was a very silly story that made everyone on the call LOL. The end result had a kind of “you had to be there” goofiness! 🙂 So we polished it up a bit for you — the nugget of the story is the same, with a few details added for our blog audience!

The Counselors Save Christmas

…Now this is the story all about how Christmas life got flipped and turned upside down.

Santa Claus lived in the South Pole, Christmas was hot and humid, and this was just the start of a very strange holiday season.

Santa had been thinking of retiring for some time now, and so in the twinkle of his eye he abruptly decided to delay Christmas and go on a holiday to Mexico.

Because Santa was in Mexico, his elves were left to carry on with things. And they desperately needed help. So the elves recruited aid from the penguins, who were regularly seen snowboarding across the hills but were actually new to all this Christmas stuff and didn’t quite know where to begin.

Because the penguins don’t have fingers, they actually couldn’t contribute that much, except for some excellent clapping! So the elves thought they’d better seek new help.

Then the Empress Penguin (Emperor, but a lady, of course) stepped up and said she, with the help of the elves and other penguins of course, could take on any of the unexpected challenges that were certain to come in making Christmas gifts for the whole world.

First, they decided to look for ways to improve the functionality of the penguins’ flippers. One elf had a great idea — the penguins could wear gloves! If only they could figure out how to move their glove-fingers…

None of the counselors were at camp in West Virginia, but stalwart building guru Garrett O’Dell was and was more than glad to play a role in saving Christmas! So Garrett went to The Camp Workshop to make bionic hand prosthetics so that all the penguins would have workplace accommodations.

He started off intently, and in the quiet of this strange winter, all that could be heard from chilly Tent Row where the elves were sleeping, and from the Greenbrier River where the penguins were floating, was the tap-tap-tap of Garrett’s hammer echoing down hill all through the night.

Garrett was entirely focused on his job when suddenly there was a blackout. He was sad that he couldn’t continue working and was ready to take off his tool belt for the night when Rudolph the Reindeer appeared to help him. Not only did Rudolph’s bright nose illuminate the night, allowing for Garrett to finish the penguins’ gloves, but the other reindeer had picked up ‘Ghany counselors from all corners of the world, bringing them to Alleghany to help finish the Christmas festivities.

The counselors immediately got to work, but they really missed the campers. So they hatched a new plan…

The counselors gathered around a warm campfire and by lantern light they wrote notes to all their campers. When they were finished writing and eating some wintry s’mores, they attached the notes to gifts, along with Camp Alleghany Jibbitz for the campers’ Crocs. Then they gave it all to the Empress Penguin to deliver in Santa’s stead.

Down in Mexico, Santa, who was checking his list twice while sunning on the beach, got wind of the elaborate Elfin-Penguin-‘Ghany Counselor mission. Santa was thrilled to learn that he could take a few weeks off in Cancun without Christmas falling apart.

He was very proud of everyone involved and decided to pack up his maracas and switch out his straw sombrero for his usual velvet stocking cap and fly to West Virginia to visit and congratulate everyone.

All the counselors got to personally meet Santa Claus himself, and afterward go back to Mexico with him for a Christmas holiday!

In the end, Christmas was saved, the campers got all the Jibbitzes they wanted, and the counselors had a holiday in the sun dancing around to Jingle Bell Rock!!

— The Counselors who Saved Christmas