Term campers — get on the bus!

Your daughter's independent camp experience will begin with a blast when she rides the camp bus from one of several central locations in Virginia and Maryland. Register by May 15th! 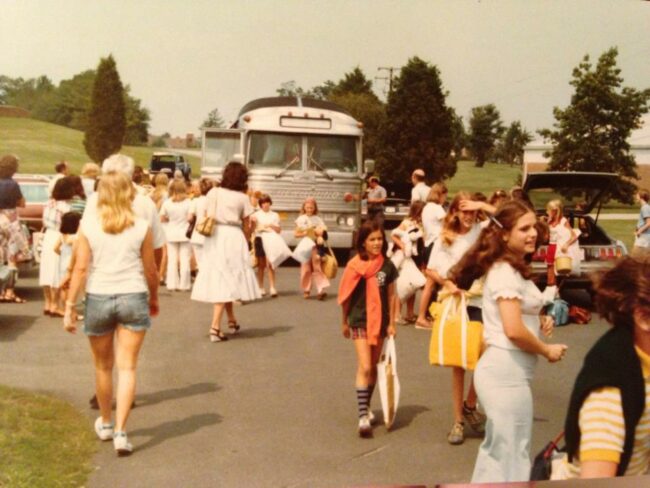 While it’s lots of fun to  ( I mean use Camp Trucking for your luggage) and head down the highways and byways to get to Camp Alleghany, there’s also something to be said for the camaraderie and enthusiasm of a Term Camper riding the camp bus with the other girls and making the journey completely her own (to say nothing of how easy this makes camp departure day on mom, dad, and the rest of the family!).

With that said, the deadline for Term Campers to sign up for the buses is soon, and I want to make sure that as many girls (Term Campers only) as possible get the opportunity for this fun and engaging ride to camp.

As part of promoting your daughter’s independence, riding the bus just can’t be beat! Fortunately, it’s also fun, and with built-in camp staff chaperones on hand, it’s a safe and inviting process as well — the chaperones help get girls talking to one another and in the camp spirit right from the start (or if there are any additional needs, such as taking medication, they can supervise that as well).

And what could be easier on the home front than just letting your daughter leave from one of our central bus pick up locations in:

For giggles, we thought we’d add this vintage set of photos from alum Jamie Howren’s shots of the bus on Opening Day in the 70s!

Our buses are nice charter buses with a bathroom, and sometimes they even show age-appropriate movies— almost like flying!

And our bus rides serve fairness on the tent front, too. In the past, a lot of campers have opted to drive with parents because they wanted to get to camp as early as possible to choose their bed. Well, we got rid of the first-come first-served thing with the beds, because some campers just didn’t have the option of coming early and getting first dibs. So now all campers draw numbers, and each number represents a bed. So with no need to rush to get to camp now, riding the bus can just take all of the stress off of the traveling process.

The buses arrive early- to mid-afternoon. Since we bumped opening day’s start time to 11:00 a.m., they’re not arriving all that much later than car riders (and some car riders come after that!). Bus riders pack a lunch and snacks that they can eat on the bus, so they’re nice and fed when they arrive at camp.

They’ll do the same check-in procedure as everyone else, and then jump right in to camp life!

As for the bus ride home — the best part is just the idea of “ripping the bandaid” rather than dragging out the good byes. A lot of campers love riding the bus home because they leave the earliest on closing day, so they get their sad goodbyes over with earlier.

From a parent’s perspective, especially for previous campers, sending your daughter via bus can really free up some time for you to do things you need to do, especially if you have other children starting camps that day or involved in other programs. And as I said earlier, riding the bus helps increase your daughter’s personal sense of independence, especially if you reassure her about things like how her tent is chosen, and how her bed is chosen within that. Riding the bus is really a way of saying to your daughter, “You’ve got this!” and then when you add a nicely packed lunch into the mix, the bus just gets more and more fun!

The deadline to register for our various bus stops is May 15. You register through your CampMinder account (and if you withdraw from a bus after June 1st it is non-refundable).

Word to the wise

But don’t just take my word for it. Here are is a testimonial about riding our chartered buses to camp.

My friend Liza Corbin Cole, a camper from ’90-96, JC of ’97, counselor and Head Counselor up through 2003, current alum, Family Camper, and HUGE supporter of Alleghany (including being a volunteer bus chaperone!) had this to say:

“I never missed the chance to ride the bus! It was all part of the ‘true’ ‘Ghany experience! That’s where the magic began — at 7:30am on a humid morning in late June in the parking lot of Roland Park Country School. Those five hours provided me —  and 30 or so other ‘Ghany girls — with the energy (and endless supplies of magazines and snacks!) we needed to kick off First Term. And now, 25 years later, I find myself volunteering to chaperone the Alexandria bus simply to be part of the magic all over again!”