What really tells us more than anything that camp is finally nearly upon us is our annual family & friends tent raising weekend. We just finished ours for 2016! 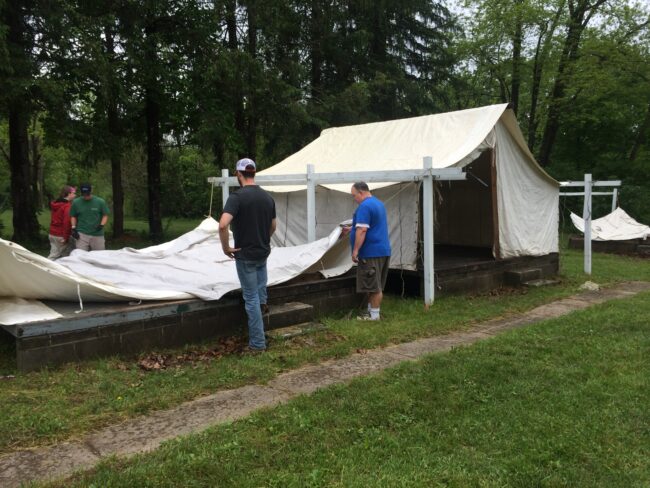 Right now we’re doing a daily countdown to camp on our social media profiles — as of today, 26 days until camp! — proving how the digital age can keep us together even when we’re oceans apart.

But the real proof that camp is almost upon us is most felt in the real world, when tent raising weekend happens each spring.

And such was the case this past weekend, when, thanks to the stellar organizational efforts of my brother Cooper (husband to Louise, our Office Manager), family members and friends reunited on the banks of the Greenbrier River to get the tents up and start to get the camp facilities opened. Cooper does this for us every year and we’re so grateful to him for that!

As anyone on the East Coast knows, we’ve had weeks upon weeks of rain, and this past week was no different. Forecasts all week called for 100% chance of rain on Saturday, the day scheduled to put the tents up, and we were all a little nervous about this.

Putting up tents isn’t easy to begin with, but it’s especially a tough mudder in the rain. It usually takes four people to put up a tent, but if the canvas is heavy with rain, it takes six people, making the work slower, heavier, and more unwieldy.

Our numbers of tent-raising participants were lower this year as well, due to schedule conflicts (lots of weddings this past weekend!), and with the forecast the way it was, we also expected that people might bail (no one did, what troopers!).

Because of the lower numbers and the forecast, Facilities Director Garrett O’Dell and his crew set out on Friday, when the sun came out for a bit, and actually got all of the Junior Camp tents up. He was anticipating a rainy Saturday and possibly having to split into teams of six instead of four. (See video here.)

But I was full of optimism and hope all week, and kept saying it wouldn’t be bad, I’m sure it will clear, etc. And lo and behold, I was right!

We arrived in sunshine on Friday afternoon, and it didn’t rain until much later. Then the East Coast deluge stayed true to form and rained all night, leaving camp a soggy, muddy mess in the morning. However, then it was over, the clouds parted, the sun shone, and it didn’t rain again until Saturday night! So we ended up with an entirely rain-free day, despite the forecast! (I should be a weather woman!)

Fun in the sun

Our team of volunteers put up all of Senior Camp and were finished by 10:30 a.m., leaving plenty of time in the day for the annual whiffle ball game and hanging out together to catch up and enjoy each other’s company. (See video here.)

The river was too high for any swimming (and frankly, the temperature was rather low, even though the sun did come out some), so we just enjoyed its burbling sounds and not a float.

The 2016 Crew was composed of mostly former Green Team guys, along with a couple other volunteers, significant others, and our collective offspring.

We had seven little ones who really enjoyed running around, playing ball, and the unbridled joys of being at camp. My mom, Special Events Director Bonnie Dawson, had fun on Saturday morning playing with the kids (several of whom are her grand babies) while the work was being done, and the passel of children loved her super slow and safe golf cart rides!

Given that the state of the river is an ongoing force of nature at camp, on Saturday afternoon Garrett informed us that it was rising in the wake of all this rain, and that we should look at the prediction to see if we should de-camp early, on Saturday evening instead of Sunday.

We decided we’d see where the river was around dinner and make a decision then, at which point the general consensus was to stay but send any vehicles that had been brought into camp back across that night; when the river is high and the current is fast, The Barge can transport people but not vehicles (up to a certain point, and then sometimes it’s just too high to transport anyone or anything!).

And then guess what? It rained again Saturday night! How we got these beautiful dry days and just rain at night, I’ll never know, but at least we got those clear days!

Packing up and looking forward

By Sunday morning the river had risen even more so after breakfast we all packed up and were able to get ALL the luggage and people on one Barge trip, letting us all go out at the same time.

Overall it was a very successful and happy weekend, the tents are all up! We enjoyed great company, and got a sneak peak at some of the improvements Garrett has been working on around camp, which I’ll tell you about soon!

In less than two weeks the administrative team moves to camp for good, and we really get the season underway.

Until then, I hope you’ll enjoy our countdown to camp on social media, as well as the photo gallery (including some ducks who have taken up residency at camp) and videos of our happy tent raising weekend!