Part One is on the mysterious world of being a camp director. Think of it like being a school principal but with a very different objective — to educate the whole child, body, mind, and spirit with the notable inclusion of the power of nature. And trust me, there's plenty in all that to keep a director occupied year-round.

Editor’s Note: The most recent American Camp Association National Camp Conference felt like my favorite one ever. It was so good, that I wanted to write 2-3 blogs about it to share with you the depth of content — speakers, topics, research, brainstorming, collegial relationships — that surface during what feels like a “camp” of our own for camp professionals. So follow along this week for an in-depth look at what running a camp really means in the 21st century. 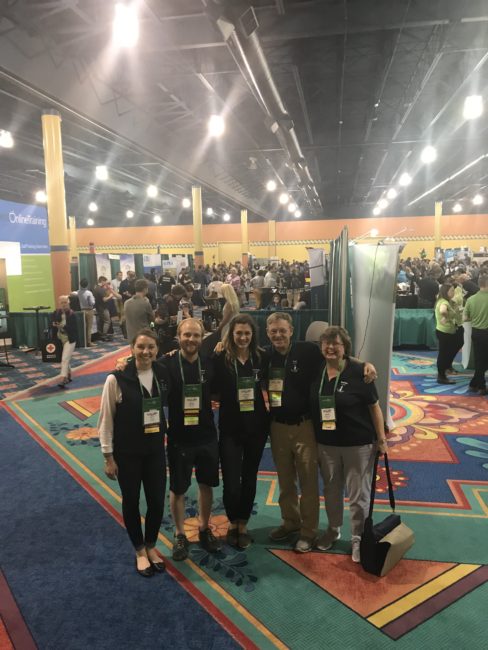 After attending the most recent American Camp Association (ACA) National Camp Conference I had an epiphany, or rather the return of an epiphany that I’ve had again and again over my years in the camp industry. That is that I LOVE MY JOB but…no one seems to understand what I do. And this doesn’t exactly make things easy on the sidelines at soccer practice or mingling at picnics and parties when I’m trying to make a case for why camp is so important in kids’ lives today.

I’d love for others to understand what a camp director’s world is like.

Spending a week with other serious-minded and yet fun-loving camp professionals was, for me, a similar experience to what it’s like for a camper at Camp Alleghany for Girls who goes home and talks about just how meaningful that time at camp is for her; the friends, the fun, the challenges, the learning, the way she grows and changes.

My week at the ACA camp conference felt like a continual brain explosion (in the best sense). That is, researchers and presenters who blew my mind, speakers whose passion fired me up and inspired me. The availability of data and science and solid cases for the merits of camp along with ways to make all this information work for an individual camp’s planning and methods.

And all this brings me back to what feels like an eternal question for camp directors: Why camp?

Interestingly, over a hundred years ago, when the American strand of the summer camp tradition was first forming, it was very clear to educators and parents why camp was an essential part of any fully educated child’s life.

Much of this had to do with kids needing to escape cities which were, at the time, before much environmental regulation, getting choked off from pollution due to industrial manufacturing. Coal-fired plants for both energy and goods, along with the general mess of cities around the 1870s or so made it clear that non-rural children needed their share fresh air, sunshine, and good old fashioned robust experiences in the mountains, woods, meadows, and rivers away from the bustle of adult duties and work.

The value of nature during this simultaneously “romantic” period was innately understood, appreciated, and sought out by adults for themselves and for kids. Hence the naturalist movements of the Victorian and post-Victorian periods, a drive to be in nature and experience it in a meaningful way.

And this “vibe” if you will lasted a good long time.

After a school year spent at desks and indoors parents back in the day didn’t even question whether their kids needed nature — it was a given that the kids did! In fact a parent who didn’t pursue those opportunities was out of step with her peers.

By then — the teens, 20s, 30s of the “new” 20th century— camp was an integral part of many if not most children’s summers, including those who struggled to afford camp. Send-a-kid-to-camp programs are almost as old as the summer camp tradition itself.

This trust in the inherent value of an outdoors and rustic summer camp experience lasted well into the late 1970s and 80s. And then?

Hmmmm…we’ll come back to this.

At some point in the late 20th century — who can pinpoint exactly when — parents started getting flooded with so many messages about their children’s safety among “strangers” (the missing milk carton kid phenomenon) or how fiercely competitive it was to get into a “good college” that all of the sudden camp started being seen culturally as kind of a lazy indulgence with not much to it.

Camp directors were depicted in pop culture either as clipboard-wielding shrilly whistle-blowing drill sergeants or as affable but clueless nimrods who a bunch of ne’er do well counselors plotted against to throw the wool over their eyes. It’s all about unsupervised “fun” and s’mores and pranks and Meatballs or, even worse, Wet Hot American Summer. We get it — it’s funny. But it’s just not the truth.

Camp is transformative and powerful and professional and we work so diligently to create this space where kids are safe and can grow in natural ways and all that we do is informed by well-researched pedagogy, best practices, and the true desire to help kids grow and develop in meaningful ways that affect their whole lives in a positive manner.

But since we as a culture never actually see examples of what REALLY goes into being a camp director, it’s increasingly difficult for non-camp families to take the camp industry seriously.

If I were a school principal, or even part of a faculty, I’d be interacting year-round with those peers and able to share stories, ideas, inspiration, etc. And since everyone’s kid goes to school (even homeschoolers) there is no question as to the value of a books and desks and pencils education.

But what about the value of non-academic pursuits? The value of nature? The value of “getting out of your comfort zone” and trying something different, like living in a residential community, sharing tent space, managing your personal affairs without mom or dad there to help, setting achievement goals for yourself in a new skill set, and so on?

In truth, camp is deep and broad enrichment and camp will help kids “compete” (perhaps better than most things) and camp sets kids up for college success and camp is key to a great personal future.

Again, interestingly, we’re in a time when all of the sudden tuned-in parents are asking again, “Hmmm, why don’t my kids ever go outside? Why is there SO MUCH SCREENTIME? Can’t my child walk down the block to a friend’s house without me driving her? Aren’t chores a good thing?”

And that’s where camp is seeming to have a revival around parents who get it. And for parents who are “camp curious” it’s the case we want to be making.

And that case is akin to the old phrase, “too much work makes Johnny a dull boy.” That is, time that is almost always spent indoors, at desks, or sedentary in front of screens isn’t just an incomplete aspect of human development, it is actually likely to harm a fuller and more complex expression of human development in the long run. More parents today need to see the truth in this and make corrective measures in their families’ lives to address it. And that’s where camp can help.

Now don’t get me wrong, camp is a kind of “work” in the growth and development sense.

And camps set in nature provide that same antidote to the busy, electronic, bustling, overly-consumptive, overly-commercialized world that kids occupy the rest of the year that it once did a hundred and fifty and twenty-five years ago. THAT is still so crucial, only now we have science to back up what parents have long known through intuition and instinct.

Camp gives a child a chance to try her wings, to exercise some crucial but supervised independence from her family and community. Camp lets her learn what she is all about, about herself, without all the common structures that are predictable in her “at home” life. And almost every camper will tell you that camp means making friends that last a lifetime while learning skills that last just as long.

That’s why families need camp more than ever.

So next time I write (next week) I’m going to share with you the actual sessions we delved into at the conference — the science, research, pedagogy, speakers, methods, issues — that help demonstrate what it is about camp that is at once serious and yet…a different approach to learning. It’s about what is based in science and yet lives out in action and activity. What is structured behind-the-scenes but comes off as seamless for the camper.

I hope you’ll tune in to my blog again — I can’t wait to share with you all that I learned!