There are many ways a girl can use her LIT experience, from being a better prepared Junior Counselor or counselor to other jobs and skills. Learn more. 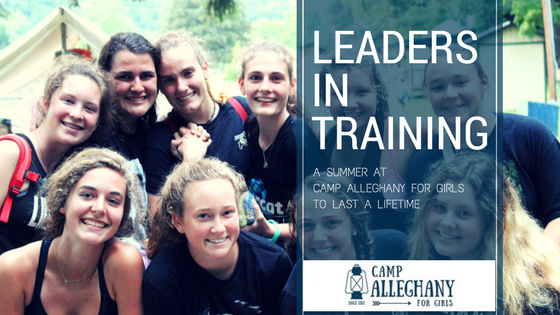 Editor’s Note: All this week and through the middle of the next we’re focusing on a series of blogs about the emerging Leaders-In-Training Program slated to begin in the summer of 2019. These blogs (and a Facebook Live event on February 7, 2018) are mostly geared toward parents looking into the program and addressing some of your questions. We encourage you to share the information with your campers so you are all on the same page. Please keep in mind that the program is still 18 months off and not all aspects of the program have been finalized. In addition to today’s blog, others include:

Also, please note that this blog (and in some places on the other blogs in this series), we use a lot of “Ghany lingo” — terms campers and alum will be familiar with, but folks new to us, or parents/guardians who never came to camp, might wonder what certain things mean. If you’re at all confused, just ask your camper. If she can’t answer, e-mail me. And finally, in an upcoming series we’ll be looking at our programming across different age cohorts, to explain in more detail what those groups doing during that summer, eg., “Midway summer,” etc.

As we’ve been developing the Leaders-In-Training Program, and as I’ve been writing this blog series to communicate the LIT program to you, I’ve been acutely aware that the 16s summer has traditionally been both the last summer as a camper, and a summer that includes the Upstart Program, a daily “class” that offers pre-training toward applying for and possibly becoming a Junior Counselor. This has traditionally been Camp Alleghany’s version of the pre-counselor, leadership summer.

From Upstart to Junior Counselor

The 16s summer Upstart Program includes things like being assigned a tent of campers to watch over and care for when an Alleghany tent counselor has time off, or learning to plan and execute an Evening Activity or lead Assembly on the days when the counselors have staff meetings.

There are other ways we have worked to prepare Upstarts for camp leadership/Junior Counseling, some of which come about, for lack of a better term, organically — having an Upstart step up into a small and usually in-the-moment leadership role at unexpected times sprinkled throughout the summer. These aren’t always huge opportunities though because they are still campers.

As 16s, and being campers, there are natural limits on this. For example, we don’t really divulge a lot of (or any!) counselor information and responsibilities to 16s because we want to protect and preserve their final camper summer, let it still be almost entirely carefree and all about THEM in many ways.

Yes, we’re coaching them to be leaders and to learn the subtleties of true service, whether in relationships, responsibilities (jobs), or camp, which is learning to put others first when the role calls for it, as it does in being a counselor. But the bottom line was that they are still first and foremost, campers.

Because of this fact, we haven’t had a true “bridge” year, where we can say, “Okay, you’re not a camper, so you get to learn about some of the behind-the-scenes facets of being a counselor, but you’re not a counselor yet because you’re not quite there yet,” (age requirement, preparation, readiness, maturity, etc).

The balance has been more clearly focused on camper life rather than more focused on developing broad leadership skills that can be applied both to a JC application/JC summer or applied in other leadership areas beyond camp.

However, we have seen a need for these skills to come about in a more focused way rather than the mix of  “upstarting” tasks with the on-the-fly leadership opportunities mentioned above.

One thing that made us shift our focus to offering the LIT program was an increase in offerings in the world-at-large for girls in this age cohort to do during their 16-year-old summers. And the fact that kids — and their families — are choosing these opportunities out there meant that we wanted to be on par with these offerings with what we offer here. Research shows that families increasingly want this.

Some choose leadership programs at colleges and universities, some try programs like Outward Bound, others get serious about a sport and go to intensive training programs, and still others choose to get that first full-time summer job, etc. And obviously, some still came to camps to just be campers again. Which is awesome!

What all these other offerings seem to have in common is a bridging from childhood to adulthood — things are getting more serious, and families are looking for more serious opportunities for their kids.

But what did we want to do about that?

In our case, we recognized the benefits such programs offer young people as opportunities for new, exciting, and more challenging growth paths that will help test and develop them as well as prepare them for a shift in life focus.

Yet we also feel we live in a society that in some ways rushes young people into adulthood and we wanted to make sure that anything we did at ‘Ghany would maintain a camp-like mood — traditions, fun, community, friendships, relaxation, and enjoyment of and connection to nature, among other things.

So how to balance the two?

In shifting from a more camper-focused to a more leadership-focused 16s summer (but still including both, definitely), the LITs will first of all have to commit to six weeks. As we stated before, we’re doing this not only to be able to accomplish all the awesome pieces of the LIT summer, but also to see if coming to camp for that length of time is something they like and want to do. It is about making life choices — what am I interested in, how serious am I, is this the right thing for me?

Such questions definitely arise when it comes to being a Junior Counselor or Counselor where they must commit to the full eight weeks. Such questions also arise in sports programs, school plays, taking internships, volunteering for an event-specific job, etc. Learning to ask and answer questions of commitment are critical too developing into a responsible adult.

In our case, Junior Counselor applicants must have been a Ghany LIT first because, in part, they will get the right skill-building to prepare them for the seriousness of the JC role. So it is important that they make the decision at age 16 about whether or not they want to commit to six weeks — it’s the same decision they’d make about committing to eight weeks as a JC except that the decision is happening one summer earlier.

Now, our LIT Program is also open to new 16s who’ve never been to camp here, and it’s open to any 16-year-old girl camper without an application process — you just register in a similar fashion that campers register for Mini or Term Camp.

But the first question here shouldn’t be, “Do I want to be a Junior Counselor at Camp Alleghany next year?” This does of course matter, because you have to be an LIT to be a JC. But the real question is, “Do I want to spend a six-week summer with a focus on leadership training mixed with camper life? Do I want to experience this bridging opportunity for whatever it might bring?”

Skills learned — and fun had — as an LIT  will have direct training toward applying for and being a JC or a counselor, but the entire LIT summer will yield results that go well beyond being a JC, too.

We know they’ll be offered fun, rewarding, and challenging contexts in which to broaden their focus and intentions as leaders (especially being away from screens). We know they’ll be treated as individuals with personal goals and preferences. We know we’ll be invested in their happiness and success. And we certainly feel confident that all LITs will gain skills and leadership that they can use anywhere while also helping them understand the role of a counselor even further.

Afterward, they themselves may even decide being a counselor isn’t for them! Or they might find that they’d want to try being a counselor elsewhere — maybe a sports camp or math camp or all-drama camp. Maybe they’ll decide after being an LIT that it’s time to do that all-sailing summer next year or go on a summer-long archeological dig. And maybe they’ll decide to apply to come back to ‘Ghany as a JC.

Over the years, parents and guardians have commented to me about the ways that their kids come back from camp changed in small but positive and helpful ways.

Maybe a Mini Camper faithfully learns to make her bed and pick up her clothes. Maybe a ten-year-old starts consistently saying “may I please,” when before she needed reminders. Maybe a young teen starts showing more initiative to put away dishes or park her bike somewhere other than the front doorstep! 😉 Or maybe any age begins to show others how to do things in a patient and helpful way.

Every summer has these opportunities at camp and every summer we hear from pleased families that their ‘Ghany Girl is building these skills and showing a true ‘Ghany spirit.

But being a 16 is that last summer where such things are learned here before going on to being a JC or doing other things. It is a bridge year. And we want our “Ghany graduates”  to take even more with them to the next phase of life, whatever it brings.

The range of opportunities we offer our LITs for leadership, planning, execution, public speaking, bonding, forming close friendships, learning about camp counseling at a deeper level, exploring and expressing their individuality in a focused and determined and constructive way, understanding the needs and co-dependency of the LIT cohort (group trip/group planning/group projects), all combine to leave the LIT at the end of the summer more prepared than ever for even bigger changes coming down the pike for her.

The usefulness of having been an LIT is something we’re confident that every LIT will treasure and return to again and again. Similarly, the fun and the friendships will always being in their hearts. Being an LIT will live on for them in millions of seen and unseen ways.

And they’ll always be our (and your) ‘Ghany Girls.