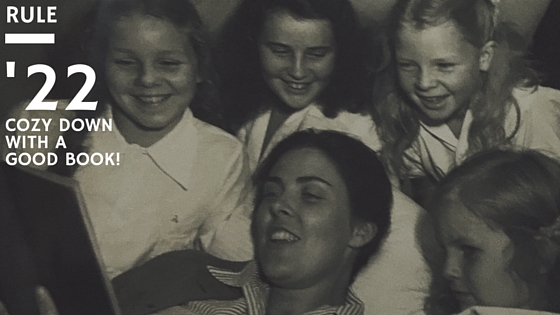 When I recently wrote about our new Summer Lending Library I was mostly sharing with you the details of how the library will work and why it’s a good offering for our campers and counselors who will have another option for enjoying Rest Hour and any Free Time sessions.

But at the time that I wrote it, busily wrapping up many issues before opening camp for the summer, and busily preparing my own family for the move to Alleghany for the summer, I didn’t also have the time to offer summer reading suggestions for our young readers.

Now, I wasn’t happy about that, but I figured I couldn’t do everything and that our parents and campers have lots of reading ideas of their own — not to mention what will be on offer in the Lending Library — so that I needn’t worry about offering my “Best Of” children’s reading list.

But still it lingered at the back of my mind, all of those fabulous books from childhood that speak so brilliantly into today. And then, when I came upon an article this weekend in the New Yorker about famed children’s book illustrator Garth Williams, I decided I simply had to carve out the time to blog about some reading suggestions for our campers this summer.

With parents getting ready to pack their daughters off to Alleghany, I wanted to make sure you were also inspired to think about those childhood faves, and make sure to tuck something in to her trunk for when that reading bug hits camp big time this summer!

Counselors often take up an out loud reading program with their campers, just like the throwback photo on this blog of a gaggle of campers gathered around their counselor as she reads to them, so I wanted to make sure that they too had some fun ideas to work with.

So many books, so little time

So what would I pick for campers to read? Sadly, due to time and space constraints, my list will be far shorter than what I would wish! Once I get started I’ll want to go on and on and on with recommendations given that there are so many extraordinary choices in the world of children’s literature.

And another thing I would say is this: It’s amazing how we can read a beloved book over and over again and find something new in it every time. Even reading to our children the books that were dear to us as kids elicits new meanings in our adult minds. Truly, children’s literature is the gift that keeps on giving!

That’s why I hesitate to break this list down by age group, but instead want to list some all-time classic recommendations (as well as some newcomers) with a few words by each to describe them with any suggestions, cautions, or other bits of insight.

I am going to list ten top picks with a little explanation behind them on what makes them so great, and then another twenty as suggestions without explanation (I wish I had the time to write about books all the time!) with the hope that you’ll “just trust me” that they’re all great!

The Little House Books. Written in very straightforward, even simple, prose, Laura Ingalls Wilder’s musings on her childhood on the American prairie offers immense insight into how American children lived in the past — the hardships, hardiness, and heartfelt connections that defined a bygone era. Great stories and drama while being very accessible to all reading levels.

Caddie Woodlawn. Cut from a similar cloth as the Little House Books, Caddie is her own little woman, a pioneer girl in a family of brothers who is fearless and full of mischief. Caddie is a heroine who makes clear that girls are every bit as adventuresome as boys. Winner of the 1935 Newberry Medal for Distinguished children’s literature. By Carol Ryrie Brink.

Johnny Tremain. Winner of the 1943 Newberry Medal, Johnny Tremain is set in Boston in the days leading up to the Revolutionary War where Johnny works as an apprentice to silversmith Paul Revere. For girls who love history, adventure, and challenge, this page-turner can’t be beat. By Esther Forbes.

The Borrowers, by Mary Norton. The first in five books about a diminutive family of “little people” who dwell in the floorboards below a “human bean” house, the Borrowers get all they need from the lands above. Though they’re not to be seen, the temptation to venture beyond their cubbies is too great and that’s when zaniness ensues. Little people sleeping in matchboxes and using thimbles to cook in — what’s not to like?

Jane Craighead George’s Julie of the Wolves, winner of the 1973 Newberry Medal. Julie (or Miyax as is her Eskimo name) is trying to come to terms with her own culture and the wider culture beyond her village. When faced with having to marry early, she chooses instead to venture off with her pack of wolves to find herself on her terms. A great book for young girls in transition, tempted by the larger world while trying to stay true to themselves.

The Chronicles of Narnia by C.S. Lewis. One of the greatest theologians of the 20th century, C.S. Lewis brought an inner view of the mystery of Christianity to the “fictional parallel universe” of Narnia, but one that unfolds with such subtlety in stories that include elements of fairy tales from the British Isles and pieces of Greek and Roman mythology. Yet all of it is told as the adventures of four siblings. Caring, engaging, simple to read yet always holding out wonder, you can’t go wrong with this series!

The Little Princess by Frances Hodgson Burnett. One of the most beloved children’s books of all time, Sara Crewe, the heroine, is a level-headed and unpretentious but privileged little girl who lives in finery at an exclusive boarding school. One day her fortunes tumble, leaving her seemingly destitute and at the mercy of a villainous headmistress who exploits Sara’s hard times. In spite of her struggles, Sara remains loving, determined, and true to herself, behaving with dignity even in the worst circumstances. A tale of goodness, fortitude, and friendship.

The Secret Garden, also by Hodgson Burnett, is the story of spoiled, sickly, and entitled Mary Lennox whose sudden orphaning leaves her at the mercy of relatives in the English countryside. There she meets her even brattier, more sickly cousin Colin, and Dickon, the charming Cockney brother of a housemaid who charms animals and is in tune with nature. Dicken’s good nature inspires Mary to help Colin heal from his malady, an effort undertaken in a secret and forbidden garden on the grounds. A good intro to gothic elements and the power of love and kindness to transform us.

Charlotte’s Web by E. B. White. Another tale of female courage (Fern’s and Charlotte’s), possible peril, and the redemptive power of love and devotion, E. B. White’s enduring — and endearing — classic never fails to uplift and encourage. Though there is loss, death, and letting go in the story of the turning of the seasons and the cycles of life, its essential lesson, which we cannot escape, paints the whole affair in such loving hues that we cannot help but accept our fate and know that…it is good.

The Harry Potter books by J. K. Rowling. An instant classic, the Harry Potter stories have it all — great storytelling, the world-upending power of magic, heroes, villains, and boarding school! While the movies are great, there’s nothing in them to equal to deft humor that Rowling brings to her writing, and the many more details that only a book can tell.

Because of Winn-Dixie by Kate DiCamillo (animal story)

Stuart Little and Trumpet of the Swan, both by E.B. White (American classics that every child should read)

Matilda; Charlie and the Chocolate Factory; and The Witches all by Roald Dahl (comedic, imaginative, fun!)

Winnie-the-Pooh by A.A. Milne (better for kids than for toddlers!)

The Giver by Lois Lowry (sic-fi to a degree, but personal resilience as well)

In addition to these suggested picks for you, we’ll have an assortment of books in the Lending Library, from simple picture and story books to chapter books to reference books, biographies and more!

I would love it if you would also share any favorite book recommendations in the comments field below the blog or on our social media channels.