You are here: Home / Directors / I Remember the Songbook Challenge! 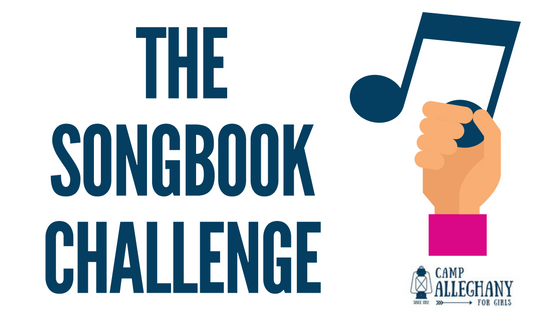 I love this time of year and especially LOVE Christmas music!

The other day, Maria Carey’s All I Want for Christmas came on the radio, and I was instantly taken back to this summer’s Christmas in July at camp, when I had to sing that song over the loud speaker for our morning Snooze Alarm.

Now, lest you think I just have a penchant for serenading the whole camp first thing in the morning, let it be known that I HAD TO SING THIS SONG over the loudspeaker because I had lost another “Songbook Challenge.”

I touched on this super fun, often humiliating, part of my summer in my Top 5 of 2016 blog, but there’s so much more to talk about that I figured I would do a whole separate blog on the Songbook Challenge to bring you all up to speed on what it all means.

The Songbook Challenge started the previous summer, in 2015, but it spontaneously arose during 2nd term, so 1st termers hadn’t experienced it. And this summer it took a twist anyway… 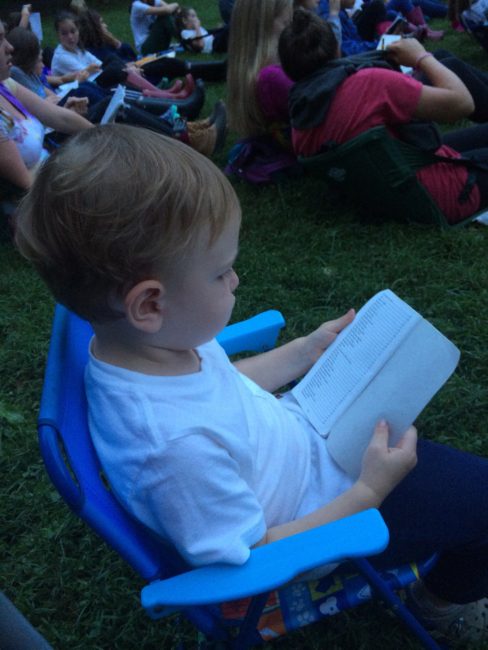 My two-year-old son Ellis can’t read yet, but if he could, he’d read the Camp Songbook! (Click to enlarge.)

Last summer I was trying to think of ways for the campers to look at their Songbooks more often. My hope was for them to familiarize themselves with the songs and lyrics of all-time camp classics that have been beloved for generations at camp. We always say to bring your Songbook to Campfire, Vespers, even Assembly, and most campers do, but we still sing the same songs, OR when we do sing ones that aren’t sung as often, it seems that no one knows the words or the tune.

I’ve brainstormed many different ways over the years to really bring back some of the songs, or correct tunes, etc, and the Songbook Challenge is one of the ideas that I came up with, although to be honest I’m not sure it entirely had the highbrow effect I desired.

Campers did end up getting exposed to and learning more songs. But it came at the expense of my dignity! That is to say, it ended up being super fun, super funny, and super silly — at my expense!

So here how it works. First I boast to the whole camp that I feel confident that I know EVERY song in the Songbook. I say I know these songs backwards and forwards, upside down and inside out. I know these songs so well, that any camper, any group of campers, any tent, any anybody can come challenge me to sing any song from the Camp Songbook and if I fail to deliver on my boast, that is, if I lose the challenge, I have to do whatever funny thing they want me to do.

Fortunately for me there is a little catch. The catch is that I have to agree on the punishing task before they tell me the song. They can tell me that if I lose I have to do XYZ, like, say, shave my head, and in that case, well, I can and will decline it!

But fortunately for them — and for the spirit of the challenge — I think I only declined maybe 1-2 challenges total. Most of the campers cooked up challenges that were funny and completely doable without going too far. And I wanted to show them that I was game!

During 2nd term of 2015 when this first started, campers or counselors mostly approached me in small groups when I was spotted walking around camp, Songbook in hand, and challenged me right there. I did lose a few and had to do some funny things, but there wasn’t a lot of pressure because it was small groups of campers.

During Summer 2016 however, the Songbook Challenge took on a whole new life (as traditions at camp often do). Now it was a DAILY occurrence at Assembly, in front of 200+ campers and counselors! And let me tell you, when they were waiting for me to sing the song, you could hear a PIN DROP in the Play Hall, which pretty much never ever happens.

I lost QUITE a few this year, and I’d like to blame it on that pressure and freezing up in front of the entire camp, but the reality is that there are just some songs I don’t know fully! And that is ok 🙂

I took morning walks around camp most mornings before Reveille, and usually would listen to an audiobook. But I’m not going to lie, some mornings I studied my Songbook on my walk instead. 🙂

So what were some of the “punishments” that, after losing a challenge, I had to do this summer? Here is a list of just a few of them:

But I think the funniest and most fun challenge that I lost was when I agreed to perform a “love duet with a Green Team guy.” I ended up losing that one, and instantly the entire camp started chanting “Garret! Garrett! Garrett!” as their choice of Green Team guy, even though he’s technically not on the Green Team, but rather manages the Green Team.

So, hat in hand, I informed Garrett of this, and of course he was like, “How did I get roped into this?!”

But being the amazing sport and team player he is, of course he agreed. We spent the better part of an entire day trying to figure out which song would be best — one we could both sing but that the campers would know already. We finally settled on I’ve Had the Time of My Life, and agreed to perform it the very next day, microphones and all, at Assembly.

Little did either of us realize just how funny everyone thought this would be. Garrett’s ENTIRE staff of Green Team, facilities, kitchen and housekeeping, PLUS his wife and kids showed up at Assembly that morning. I don’t think a single person in camp missed this. I’m surprised it wasn’t broadcast via satellite that’s how big an event this was!

It was so fun and funny, and I honestly was laughing so hard I was crying during some of it (I mean, some of those lines…in front of his WIFE!!!). But it was just so much fun and we had a blast.

I know several people from Garrett’s staff videoed this performance (as phones and videos aren’t allowed for our campers and counselors to have), so it’s out there somewhere, great fodder for bribery if ever anyone wants to “Gotcha” me!

So I think you can see why this was one of my most favorite parts of the summer. I’d love to keep doing something along this lines but maybe switch it up somehow. For example, I could win every challenge if I really tried. Or I could propose a “bonus challenge” that I would hate to do and every time I’m challenged someone draws from a hat to see if they pull the “bonus challenge” to really up the stakes…