Hoos Your Daddy? (I Mean Granddaddy!) 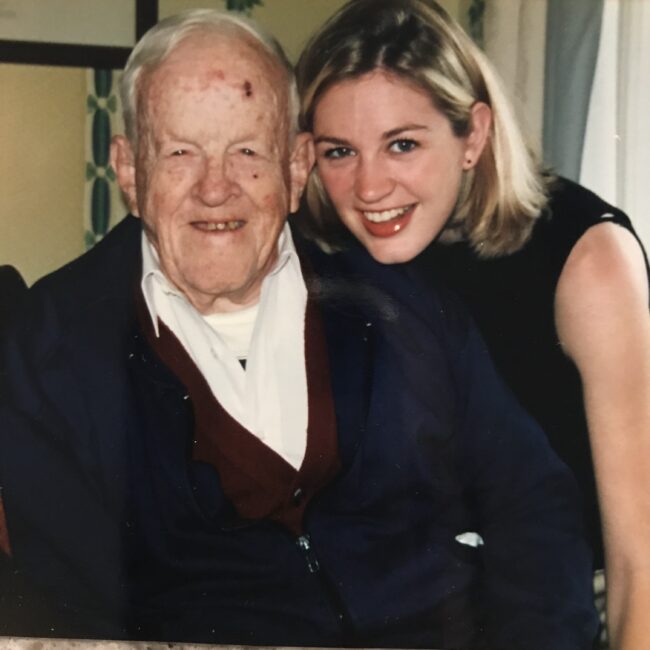 Long time camper and staff alumnae and Green Team alum will recall with fondness my grandfather, S. Cooper Dawson, Jr., who owned and ran Camp Alleghany for Girls beginning in 1963.

We — the family — of course, remember him very fondly, too! 🙂

And if you knew him, it’s likely you knew that he was a University of Virginia alum (class of 1932), which was exactly 70 years before my time there (class of ’02).

He was also a total gonzo UVA sports fan — GO HOOS!!!! — a passionate devotion that he transferred to my dad, Sam Dawson, President Emeritus of Camp Alleghany today, and to me, too. (P.S. —  my Aunt Marion Dawson Robinette ’77, and my sister-in-law and our Office Manager, Louise Dawson ’04, are also UVA alumnae.)

But did you also know that my grandfather, who I called Papa, was an alum of UVA Basketball? Yes, he played hoops for UVA back in the day, a total Cavalier! (And while I’m at it, he was on the baseball team during his time there, too.)

It’s lucky he was on both teams at all because his admittance to UVA was, let’s just say, less than what we’d call the traditional route today. The truth is he actually forgot to apply to go to school at the venerable University of Virginia. And for most people that would be game over. But Papa wanted to attend. So in typical Cooper style he just showed up on the first day.

Yep, just showed up. He simply marched up to the admissions office basically to “sign up” (rather than apply).

He told the University where he’d attended high school and a little about his background there and basically said, “Now I’m ready for college.” So…someone in admissions just dialed up his high school to make inquiries and his high school vouched for him as a good guy, and…he was admitted. Done and done.

Not quite the SATs torture and essay stress and copious list of extracurriculars that the rest of us had to endure!

All that aside, if you add all this up I wonder if it becomes obvious that in the extended Dawson family we’re all going Wa-Hoo-Wa for our team’s status in the finals of the NCAA National Championship today?

I mean seriously, it’s all Blue and Orange in our houses right now (with apologies to my husband Matt, a Virginia Tech alum who, you know, still has a thing for that other Virginia team, the Hokies! Poor Matt, when will he learn?).

So….in the midst of our spectacular Virginia mania our thoughts are naturally turning to Cooper, to Papa. HE WOULD BE SO PROUD!

And so excited and so thrilled and so pumped up because he was the biggest Virginia fan I ever met (a status I think my dad has taken on in his stead). Seriously, you should see Sam going wild right now. I mean lucky for him I’m the Director of Camp Alleghany now because I’m sure he’d be so distracted today that nothing else would get done!

Papa was a rather storied former basketball team member, too.

In February 2005 Papa was honored as the second oldest living member of the basketball team. Virginia was celebrating 100 years of basketball, and had a representative from each decade honored during half time of the game. Aunt Marion and I had the privilege of escorting him onto the court during the halftime celebration. Sadly, he died just a few months later, that October 2005, at age 96.

But how special that this former Cavalier, former basketball player, total fan, had this moment of recognition near the end of his life. It was so wonderful for him and we loved being a part of it!

Papa was such a TOTAL Virginia fan, and had so much loyalty to the school. He LOVED UVA!

In fact, his life really embodied the principles of the honor system at UVA —  that we don’t lie, cheat, steal or tolerate those who do. He made it a point to bring that honor system to Camp Alleghany for Girls, developing a culture that’s still a very much treasured, respected, and honored aspect of Alleghany’s mission, culture, and community.

And so in honor of Cooper, of Papa, and in our collective family celebration of UVA going this far (and best of luck tonight, ‘Hoos), Sam Dawson and Bonnie Dawson will be personally donating to the Camp Alleghany for Girls Lantern Scholarship Fund. With the ‘Hoos win on Saturday night,  they’ve pledged $250. And if UVA goes on to win the whole thing, Sam and Bonnie will double it to $500!

And just for getting in the Final Four, they gave $100. Wahoo!

‘HOO will join us? Donate here.

And Papa, we know you’ll be watching from heaven where you’ll truly be in heaven over UVA!