Hiring a Head of the Green Team

If you love the camp life — and maybe even Ghany in particular — here's a job that can get you outdoors, moving about, inspiring others, and helping camp tick along! 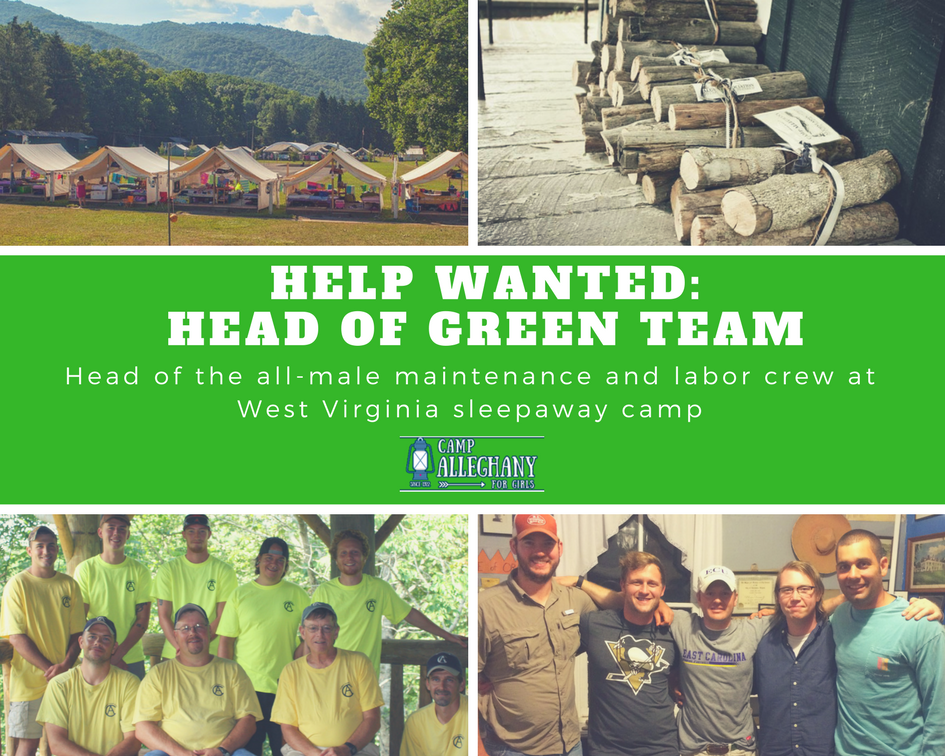 With lots of on-site activity and facilities growth at Camp Alleghany for Girls, we’re introducing a new (or rather, a revived) summer job position for Summer 2017 and beyond. We’re looking for a Head of the Green Team!

And what is the Green Team? It’s our all-male site maintenance and labor crew during the summer months.

Let me tell you a little about how that crew has worked in the past, and what our needs are going forward.

Our year-round Facilities Director, Garrett O’Dell, has been effectively functioning as the Head of the Green Team for many summers now, and it has worked out well. Garrett has the perfect personality for this leadership and team-building role, and really enjoys it.

But as his responsibilities have increased over the years, it’s been harder for him to do everything he needs to do in a given day during the summer. Additionally, Garrett doesn’t live on site at Camp Alleghany for Girls, but goes home every night, leaving a bit of a hole in Green Team leadership throughout the night. And since camp doesn’t stop at 5pm, we started to realize that perhaps a deputy for Garrett would fit the bill!

Before Garrett came to ‘Ghany, the Green Team and Facilities were two entirely separate departments, and we did have someone heading the Green Team. He was beloved Mr. Garrison. Mr. Garrison headed the Green Team for ages  (our vibrant alumni community will absolutely recall him). When he retired we filled his shoes with a couple of former Green Team guys who did well, but weren’t able to commit to it long term (for at least a few consecutive summers like a teacher or retiree might be able to).

So Garrett took it on when he came on board, and is now ready to pass on the responsibilities to someone else. This new person would oversee the Green Team, and report directly to Garrett. So essentially it’s someone between Garrett and the Green Team — a deputy if you will!

For the sake of this list I’m abbreviating the Green Team as GT, and the responsibilities include:

Camp is a busy place, but also a pleasurable one! The Head of the Green Team (like its members) would also savor the beauties of the Camp Alleghany setting, Greenbrier County, the river, starry nights, campfires, etc. — a dream job for the outdoorsy type!

The job does have serious responsibilities, but isn’t designed to be stressful. We intend for it to be (mostly) enjoyable work in the great outdoors — maybe taking out the trash isn’t as enjoyable as, saying, poling the Barge, or putting your problem-solving and mechanical skills to work, but the job is mostly unique and enjoyable!

So who should apply? Anyone, really! A male would be nice, just for team-building relatability, but we wouldn’t discriminate if a female applied.

The job would also be perfect for someone with summers off — like a teacher — who would like to enjoy some time in Greenbrier County, away from the fast-paced modern world. Or perhaps someone who is retired and would like to spend their summers contributing to Alleghany a bit.

One final requirement — the person who gets the job will need to commit to being at camp June 4 – August 13, 2017, but certainly will have some time off built in, and if needed can leave for a weekend or previous commitment like a wedding or key family event.

I hope that our broad community of ‘Ghany alum, family, friends, and parents of campers will circulate this job listing to any fine persons who they think might like this job. Applicants can begin the process by sending a cover letter and resume via e-mail to Garrett O’Dell, Facilities Manager, Camp Alleghany for Girls.

Thanks for reading, thanks for sharing, and good luck to applicants!