Fright night is upon us and sometimes there’s not a lot of time to concoct a costume. And sometimes it’s also fun on Halloween to go as your own personal in-joke so that when someone asks what you are, you’ve got a built-in conversation piece and you get to talk about one of your favorite things — Camp!

To that end, we’re rolling out some fun camp-themed Halloween costumes with a particular ‘Ghany spin this year. We hope you’ll enjoy! 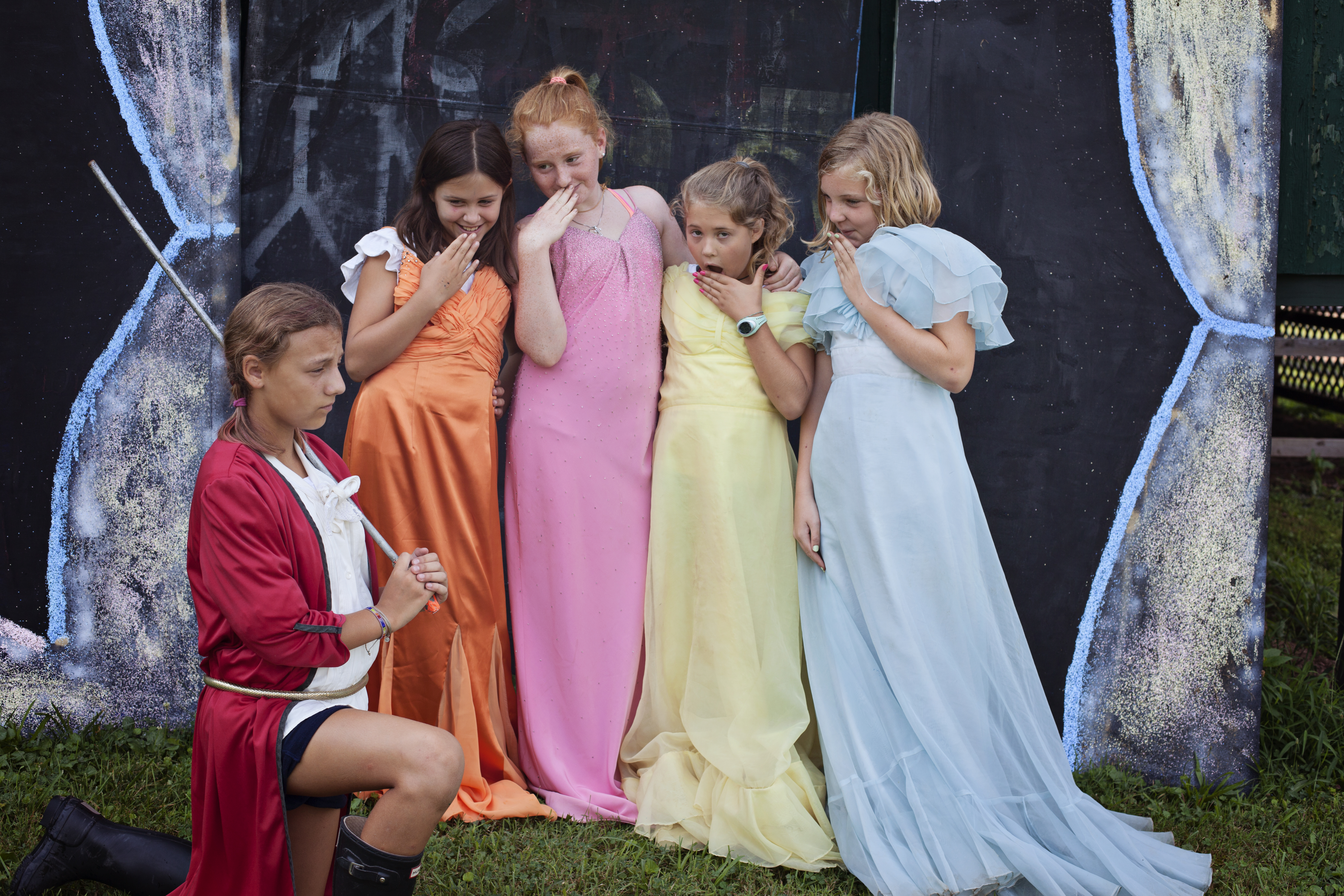 Our Drama Department Green Room is packed to the brim with amazing costumes dating decades back. Many of my grandmother‘s old dresses are in there, and are worn regularly during Drama plays or other events with costumes. And an old bridesmaid dress of mine still shows up regularly in plays!

A lot of people over the past decades have donated dresses, dance costumes, and more!

It’s funny, because campers and counselors definitely have their favorite costumes, so much so that some costumes even have names now. There’s a beautiful yellow ball gown that has been dubbed the “Beauty and the Beast Gown.” And there’s a dress with a funny pattern on it that resembles the licorice candy Good and Plenty, so that is called… you guessed it…”The Good and Plenty Dress.”

We have a ton of fun with those old costumes and it’s always a treat when, “The Green Room is open” (meaning campers or counselors can borrow costumes for non-Drama events and activities.)

So in keeping with this theme we encourage you to find an old ball gown from the back of your closet, borrowed from mom or a friend, and just…become the princess or beauty queen or fanciful lady that such a dress would suggest. Or grab anything that could make an on-the fly costume and because that character! Let your imagination run wild (but if you’re in a gown, make sure you bring a cloak to stay warm!)

2. Keeping up with the Dawsons & Other Skits and Plays 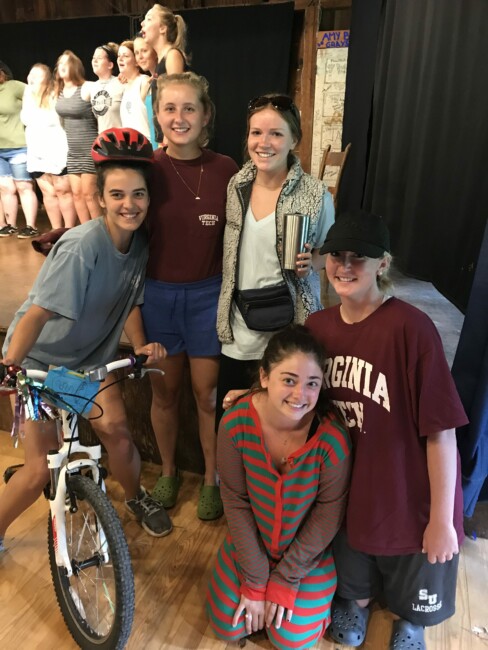 During our daily morning Assemblies, the counselors often put on skits for the campers. A famously popular skit is known as “Keeping up with the Dawsons,” where the counselors dress up as me, my parents, Louise, our husbands and children, and in the past even pets.

It’s hilarious to see the counselor playing Sam by putting on a Washington Nationals baseball cap, and a camera around her neck.

Of course my iconic fanny pack makes an entrance, and the counselors always joke with me that I am ALWAYS wearing Blues and Whites, so that’s what the person playing me will wear. It’s a really fun day when “Keeping up with the Dawsons” happens at Assembly!

So if you’re looking for a costume for yourself, or for a bunch of you to wear together, grab a baseball cap, a fanny pack, some blues & whites and whatever else makes you think of the Dawsons/Shreckhises and…keep up! 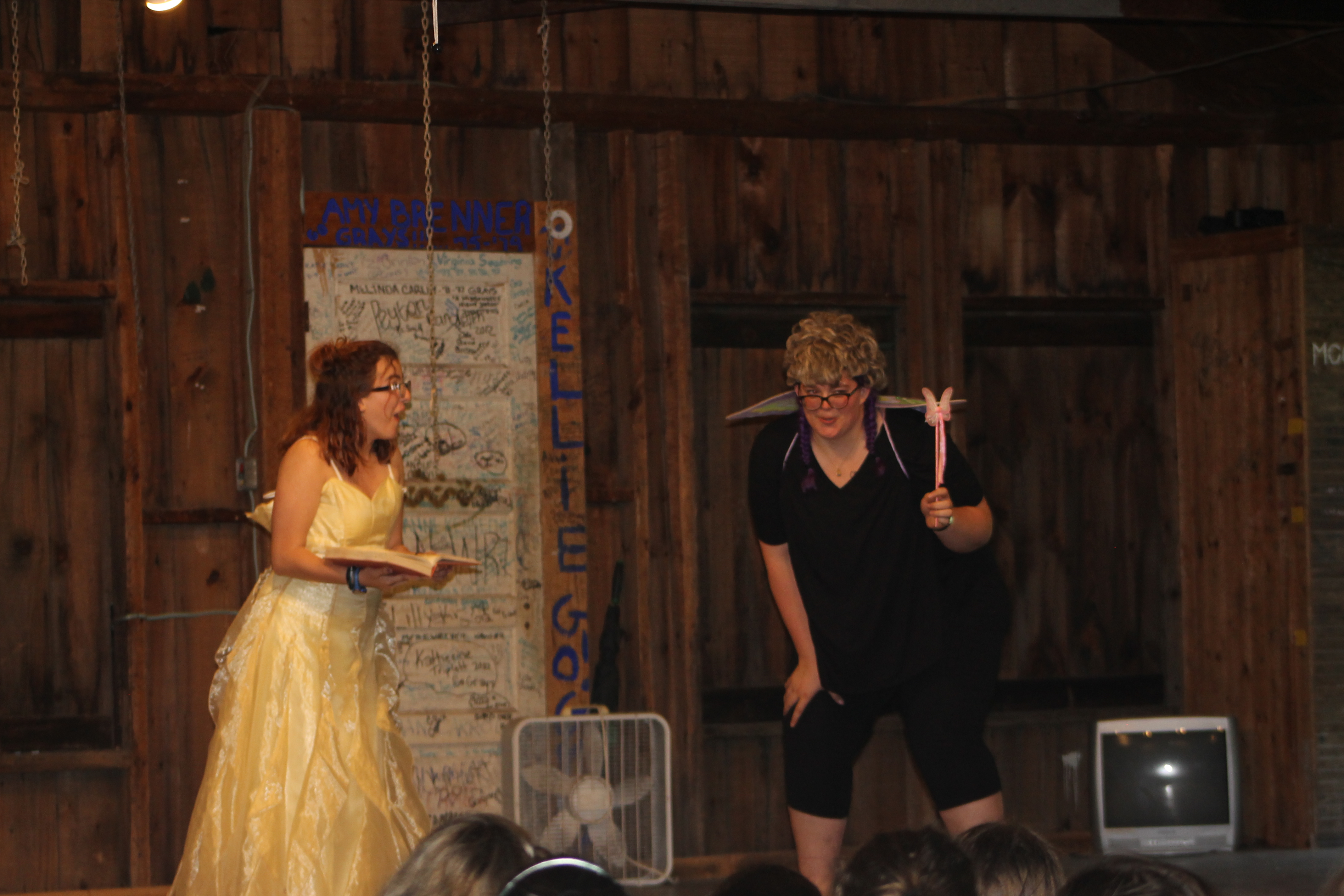 The Counselor Show is another awesome time to show off costumes and get dressed up. Similar to the Assembly skits, each summer the counselors put on variety shows for the campers, ranging from very talented musical or dance performances and songs, to super silly skits or lip syncs. Of course we use the Green Room costume trove for this and it’s one of the campers’ favorite nights!

If you were being a ‘Ghany counselor for Halloween what would that look like to you? Especially one costumed-up for a skit? Start with some ‘Ghany gear as a base but don’t stop there because maybe she’s playing a guy with fake mustache and beard. Maybe she’s a wizard, conductor, donkey, or puffy white cloud. Those counselors will think up anything — ANYTHING — nutty in order to play a character of any kind for a skit and you can, too!

So what’s in your bag of tricks? 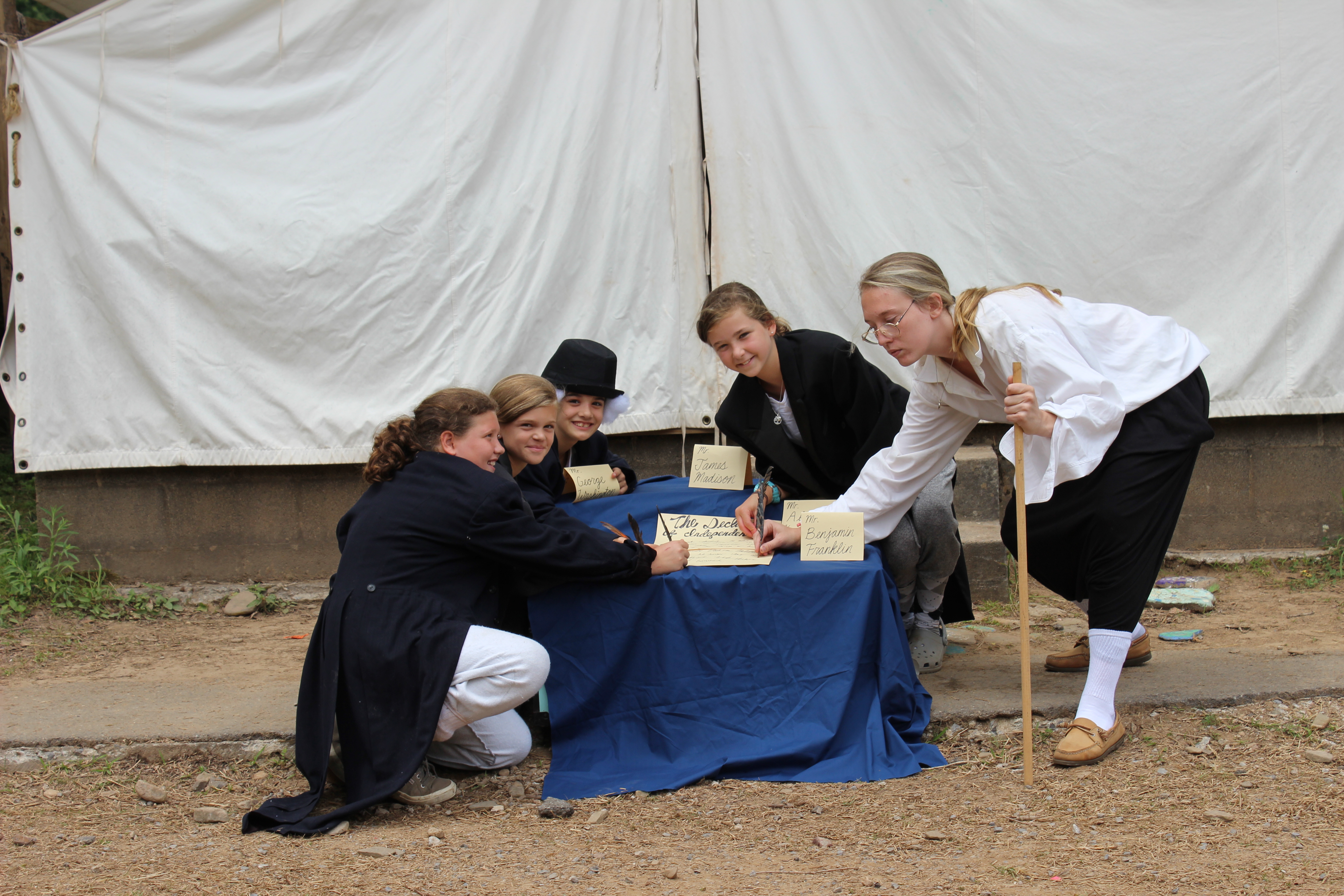 Campers know how it is when it comes to Tent Pictures. It’s definitely another time when we draw from our wild imaginations and dress up, only this time we dress up together with a theme for the whole tent.

Once each Term, the campers come up with a theme for their tent picture and then pose in costume for that picture, which becomes a treasured bit of memorabilia for that summer. So many hilarious pictures have come out of this over the past years and the campers just keep getting more creative.

One of my all-time favorite tent pictures was when the pictures were taken on the 4th of July. One tent dressed up as the founding fathers signing the Declaration of Independence.

Another fave was one summer, when our now Leadership Program Director (then Counselor) Teresa’s tent dressed up as nuns, and she was Mother Teresa. Positively saintly!

I can’t say we were quite as creative back in my day, but this is definitely now one of my favorite days and I love looking through the photos. Campers who come every summer will sure have a bevy of tent pictures from summer-to-summer to look back on fondly.

So grab some friends, cook up a theme, pull it together, and then find places to take pics, whether they look like a tent or not. Can’t wait to see what you do! 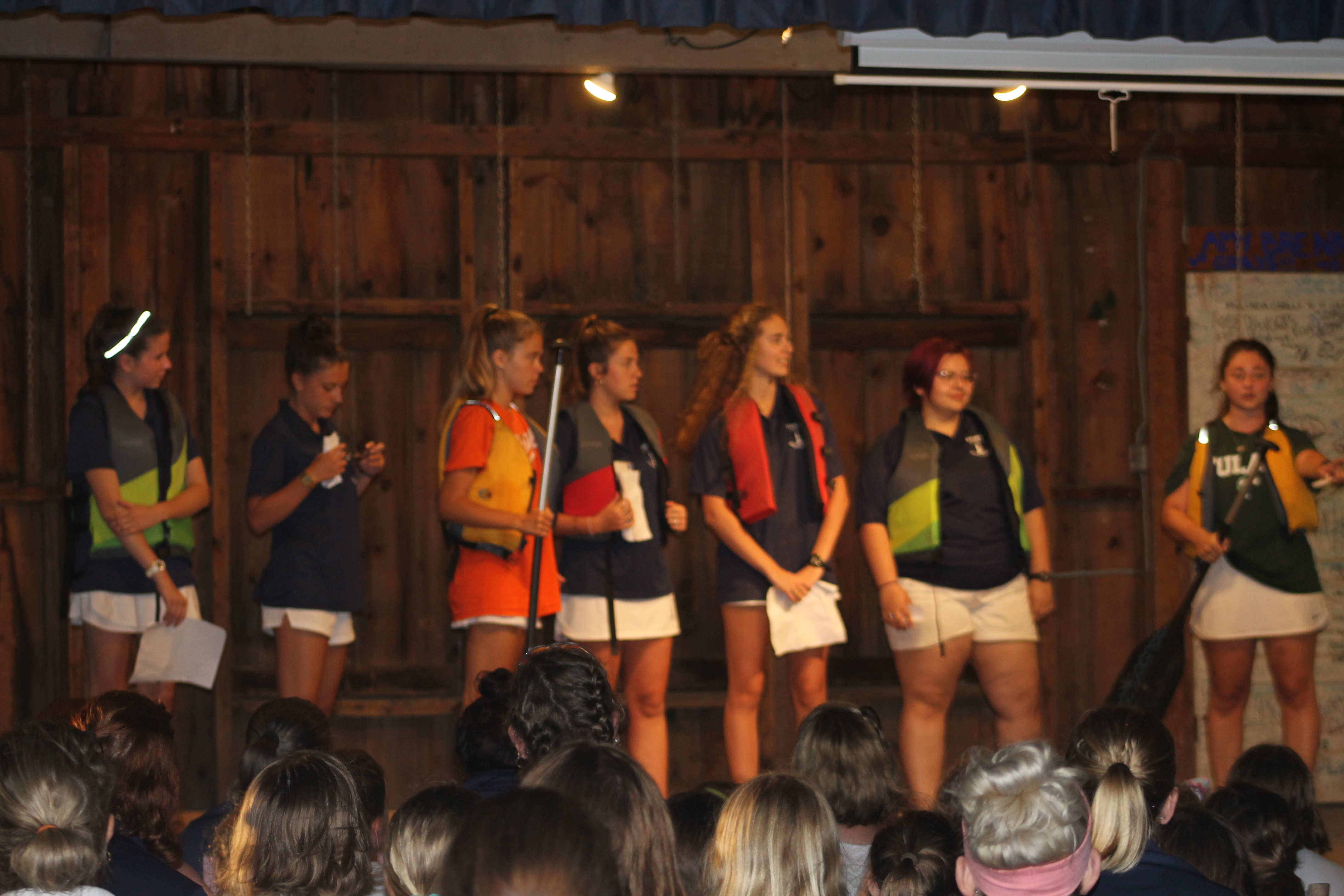 If you’re still not sure what to dress up as, make it simple and do a camp theme! You could put on blues and whites and be a camper off to dinner. Put on jeans and a camp sweatshirt, grab your Crazy Creek, and you’re a camper off to Campfire. Or how about a Nationals cap, a camera on a strap, high white socks, and a tucked in tee shirt – you’ve got Sam!

If you live in a warmer climate, you could put on a lifejacket and make a canoe paddle out of cardboard. For that matter, you could make almost any camp-themed prop from your favorite camp activity. Send us a picture if you try any of these!

Meantime, stay healthy amidst the flow of candy, and if you’re not too afraid, read my old blog post on the t-t-t-terrifying haunts of ‘Ghany…BOO!