You are here: Home / Campers / Back at camp 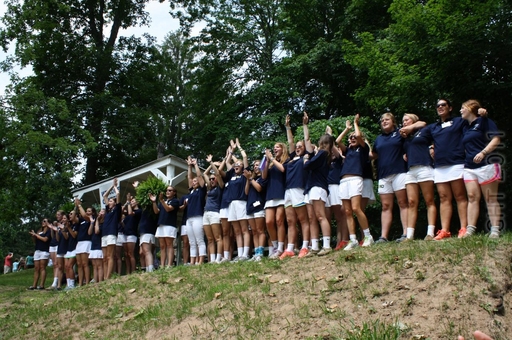 The counselors greeted us on Opening Day. Photo: Camp Alleghany.

When I came across the Greenbrier River on the barge with my parents this year I was greeted with the familiar “Welcome” song, as I had been my previous two summers.

Senior campers stepped into one line and junior campers into the other in order to get our tent and counselor assignments. A tall brunette with a nose ring looked up when my Tent number was called and said, “My first camper.”

She introduced herself to me and my parents as Hailey and since I’ve gotten to know her in the past week I’ve realized she is one of the nicest, funniest, and coolest people I have ever had the pleasure to know. Since I’m an Upstart, I don’t have Hailey in my tent like younger campers do, but she’s right next door to us and we still hang out every night.

One of the first things Hailey told me was about who my tentmates were. I’d be living with Bridgett Criswell who had been my tentmate 13’s summer and who is completely amazing — she’s just so funny and sweet. The other would be Anna Morgan, who was my previous counselor — Hope’s — “little” sister. Anna and I had become very close friends last year and we’ve had so much fun already this summer.

What to do, what to do

After the evening activity that night, which was the different department skits performed by the counselors to get us excited about and interested in the different activities, I had decided which ones I would take. (Not that it was easy to decide since the Counselors made them all look so good…but I had to decide, so I did.)

For my first class I chose dance. Hailey is head of dance and she and her amazing staff decided on a theme for the Upstart dance which is a big secret that I can not divulge but I can say this: get nervous!

For my second class I chose Fitness so I could keep up my training for the upcoming Cross Country season back at school.

For my first afternoon class, which is after lunch and rest hour, I chose tennis. This only meets every other day because we have a 15’s class on Tuesday and Thursday. (I was so happy that Audrey, my tennis buddy from last year was head of tennis. You can read about why I think she’s so great on another blog post I wrote about how my skills get better every year when I keep trying things.)

Finally I chose swimming for the end of the day which has been great during this hot, hot summer! My schedule is very active this year but I love it — I’m having so much fun!

Being an Upstart comes with certain responsibilities. Being a Hopper is one. Since camp was so full this year, all the Upstarts have to Hop — which, for the uninitiated, is prepping tables before meals, waiting tables during meals and cleaning up afterward. And while for some it’s been a challenge to get up earlier and to sacrifice some free time, it’s been a lot of fun overall and in its own way is a very unique bonding process. Hard work and all that — moms you would be proud. Jane Ann, Head Hopper, has made sure Hopping has been more than a chore. Instead she’s made it another fun way to fill our time.

Another responsibility for Upstarts is called…Upstarting! This is when we watch younger campers when their Counselors are taking a short break or are doing their planning sessions or other camp-related work. Each of us is assigned a group to “watch.” I was assigned the StartUps, the oldest girls in Junior Camp. I couldn’t be happier getting to know and spend time with these four sweet girls.

Who’s afraid of a little wind?

Now, we have had some adventures this year. Derecho anyone? I almost started this blog entry by writing, “It was a HOT and rainy night…”

All kidding aside, despite Mother Nature’s loud roar, and the lack of power for a few days after the storm, Camp Alleghany 2012 has been great so far — and I wrote this at the end of the first week; I can only imagine how the rest of the time will be.

Sadly, as always, it’s going by too fast. It seems it was only this morning that I stepped off the barge and was greeted by the tall brunette with a nose ring who I didn’t know yet.