Editor’s Note:   This is the second installment in our blog series, “All About Our Awards.”

Like our Junior Cup, the Senior Cup is awarded not so much on the basis of hard fast criteria, or an immutable checklist of “achievements,” but for those elusive qualities which, when combined in one focused, friendly, enthusiastic camper, results in a recognition that simply can’t be ignored.

And like our Junior Cup, the Senior Cup’s namesake, Cathi Hardester, exemplified those qualities during her many years here at camp.

Cathi Hardester’s first summer working at Camp Alleghany was around 1992. Cathi was a natural Ghany Girl from the first moment she crossed the river. One would never guess she had not been a camper and counselor in her younger days. She always had a ready smile for campers and counselors alike.

Many of us wear a Tree of Life necklace but probably don’t know how that trend got started at camp.

In 1995 Ellen Boyd and Cathi Hardester came upon the Tree of Life at a store in the Greenbrier. They both bought necklaces for each other forming the “Secret Tree Society.” The idea was to buy one for someone else, passing along the meaning of the tree as a natural symbol of growth and harmony; of hope, renewal, of life itself.

Ellen and Cathi had no idea The Tree of Life would grow into something so meaningful to ‘Ghany Girls 20 years later. I still wear the one Cathi gave me in July of 1995.

Like other camp leaders, Cathi had an impish side that added to her own charms. Jeanette remembers that,

Cathi also like to play tricks on others. One night she decided to put some form of jelly on the door of the Bunkhouse. After Taps, she and her husband Don sat on the Infirmary porch watching counselor after counselor open the door, look at their hand, trying to figure out what was now on it, only not to see anything. They sat on the porch for several hours just laughing. As the head counselors turned in for the night a little giggle came over the radio. It was then we figured out the Bunkhouse door had been “jellied” by Cathi. 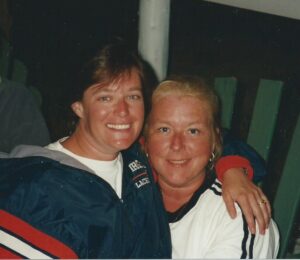 Like many who are touched by Camp Alleghany, Cathi passed the camp tradition on to her son, Andrew Hardester, who became a Green Team member.

In recalling his mother he said his mom told him that,

…her summers were not the same unless she was there. It meant a lot to her to be around everyone and share in that bond. A bond that is unlike most. Her summers seemed so much better as a part of the camp and surrounded by such wonderful people — which is the same way I felt after coming to camp.

I know my mom loved camp and Cooper from her days as a nurse at Episcopal where she met him. She loved the school, Cooper, and being the best nurse she could be to both.

She was from Alexandria and her career in nursing and working at Episcopal was one she celebrated. She always wished she would have known about camp sooner than she did so she could have had a longer tenure there and be part of such a wonderful organization.

And it was wonderful for my grandfather Cooper to have known and worked with Cathi, a feeling that’s  shared by all of us at camp.

We’re honored each summer to give out the Cathi Hardester Senior Achievement Cup as one of our most treasured and prestigious awards.

* Editor’s Note: If anyone has information on the following people, please contact me via e-mail. I’d love to learn all I can about: Mary Ball Blackwell, Louise “Noodle” Daniel Kent, and Judith Greggie Smith.